Yall, this is BIG news!

I am NOT a floral person. I barely had any flowers at my wedding, and would have had less if my dad didn't make me (floral arrangements for the altar, which were pretty). I mean, I like receiving flowers from my man as much as the next gal, but for the most part, I could take them or leave them. When we were wedding-cake shopping, we went to a high-end cake place that was very well known in the city and known for doing alot of flowers on their cakes. The only reason we went there was to just start shopping around. I knew that I didn't want any flowers on the cake. You should've seen the lady's face when I told her I didn't want any. (giggle)
I know probably alot of people can probably make flowers out of icing. I can't even do that. There is another Wilton class that tackles that, which I will probably take at some point. Yesterday we made some flowers to go with the bases we made last week. A rose, carnation, and calla lily. These are made out of gum paste, which is like fondant but dries alot harder and can be rolled out thinner (mostly for flowers and delicate designs and such.)
I took several pictures of the process, but my iPhone takes such crappy pictures none of them were salvageable. I'll take my regular camera next week. These were so fun but time consuming to make, and after making a few, I can definitely see myself making them in the future. The good thing about these is, you can make them WAY in advance and they keep, like, forever. They are technically edible, but I don't think anyone would want to eat them. They are so tiny also, they look kinda big in the pics! I'll include one crappy pic from my phone so yall can get a rough size estimate.

These are some pics I took at home. 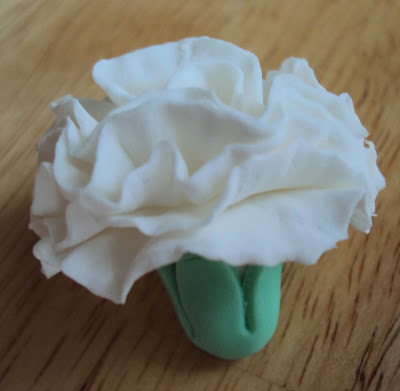 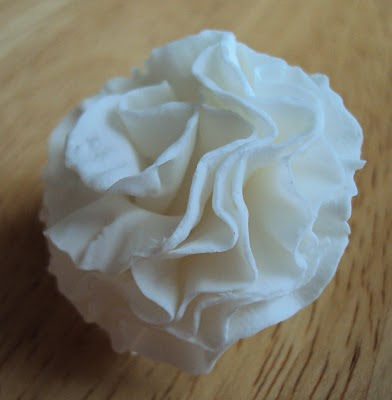 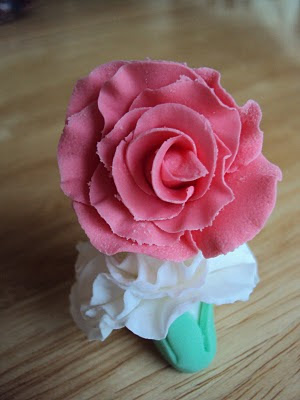 Next week we are making a couple more kinds of flowers and working some more with fondant and cut-outs etc. We have to choose or design a cake to make for our final class, in which we bring in a plain cake that's frosted and all the things we want to put on it and then basically assemble it there. There are several pics in the book that have TONS of flowers on the top, and I really like those. Which flowers do yall like best?? That means I need to get crack-a-lackin on making a few flowers a week or I won't get it done in time.
TEAM FLOWERS!
Posted by Jen at 12:09 PM