My baby started school today.
Like, stay all day and take your lunch school.
Twice a week, anyway.
He did great. It has been all he could talk about for weeks, and when I said goodbye to him he gave me a hug back and said very reassuringly, "I'll see you when I'm done, Momma." I'm the one who got choked up! But I did all right. The house was so quiet all day, and when I got #2 down for his nap, it was like a ghost town! When I went to pick up #1, as soon as the teacher brought him out I got choked up again as soon as I saw him. What is wrong with me???
One of the things #1 needed was a "nap mat". (trust me, the irony is not lost on me. The prodigal son does not nap. But they do have quiet time, and he's pretty good most of the time with that at home.) So we picked up one of these at Walmart. They said it needed to have a "enclosed cover", and if I didn't have one then someone could sew me one. (I'm thinking, a cover? can't I just use a pillowcase over it when it's folded? An then at open house the other day, I asked them about it again, I said what does "enclosed" mean? does it need velcro or a zip? Or can I just use a king sized pillowcase? and they said usually a body pillow case would work. Still, I'm thinking, won't that be really big? the thing is not that big when it's folded up.)
Folded up: 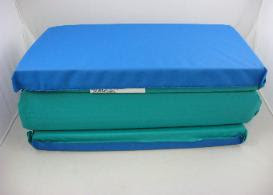 But it turns out, They meant a cover like this: 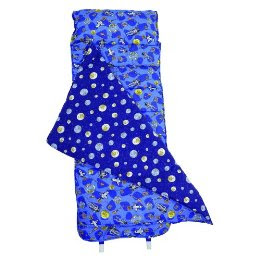 Okay, well, maybe not one as fancy as that, but at least a slip cover to go over the whole thing. WHILE it's spread out unfolded. (i.e. body pillowcase) I can't believe I didn't realize that.

I figured this out, mind you, NOT while I was dropping my kid off this morning, when the teacher DIDN'T SAY ANYTHING when I handed her the mat, stuffed in a pillowcase with a blanket, but after we left we pulled off to the side to watch (for future reference) how the "drop-off" line works. I began noticing all the other kids show up with various covers on their mats that were clearly on there before they folded them up.

So in case you missed it, my kid was the one today laying down on the stark, cold, plastic, uncovered napmat with out a pillow while everyone else snuggled in their plushy abyss. At least he had a blanket. I might as well have just given him bread and water in his lunchbox.

So tonight, I will be digging out my sewing machine, that hasn't been out of the box in like 2 years. And we will be making a trip to Joanne fabric (darn!) tomorrow morning to pick out some fabric. Because I am NOT going to buy one of these covers (that most already have a mat inside there) for $75 online.

I'll show them. Well, if I can remember how to sew in a straight line, that is.

And if I can't, we'll be headed to Target for a new body pillowcase.