Well, I seemed to be forced into taking a week off running because I twisted my ankle last week. It would have been difficult to swing this week anyway due to some other extenuating circumstances, so I figure it's just as well. Hopefully I'll get through this week without getting in a pickle, since running directly correlates with my mood. Run = Happy. More on that another time.
Anyhoo, hopefully I'll be able to catch up on my mile-long to-do list. At the top of which is this blog! I have been quite the busy bee :) these past few weeks baking up a storm. Below is the cake I made when my mom was here a couple weeks ago. She recently had a birthday so I told her I was going to bake her something and use it as an excuse to practice. Her only request was that the cake be homemade carrot cake! The top is carrot and the bottom is chocolate. The yellow is marshmallow fondant. I made a whole batch of yellow and used, like, 10% of it. Good thing it keeps!
This was inspired by Jesse from Toy Story's outfit. I was going to use some red buttercream I had laying leftover from the Elmo cupcakes I made (have I posted those here yet?) , but turns out it's been in the fridge a little too long and was no longer good :( BOO. So, in a pinch, I used the "gel" kind of icing that comes in a little tube. Long story short.....HATED IT. Lesson learned. Did not work for what I wanted to do...all gooey and drippy and ew. And impossible to use on a perpendicular surface. 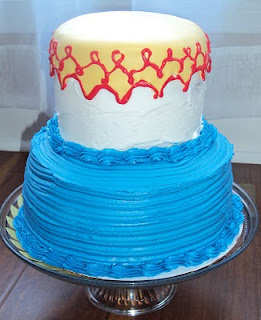 I also tried out a new kind of icing...Buttercream with out the butter. I'll give you a minute.
It's made pretty much the same way, with a few extra ingredients but no butter because if you want truly "white" icing you can't use butter! I had no idea how it was gonna turn out but--it was GOOD. yum. Also it is recommended for dying icing colors because you get more true colors starting from a white base. But, I had to add SO MUCH dye to get this blue and it still wasn't quite the blue I wanted.
I also was practicing with the "tiered" cakes. Let me tell you, it is not easy. This cake was not near as straight as it looks in the picture. I figured it was because of the kind of dowels I used in the bottom layer for support. I didn't cut the sides either because I figured I could just fill them in with icing. WRONG. 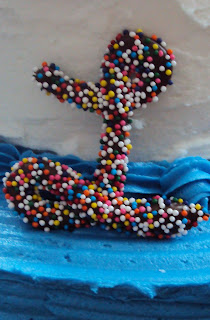 I also practiced a few different ways of personalizing the cake. I love these letters. You just take some of those melting candy wafers and melt them in a ziploc, cut off the tip and then pipe something on wax paper. Then you sprinkle on some stuff and WA-LA! So cute, huh? I made several different ones and put them on different parts of the cake. 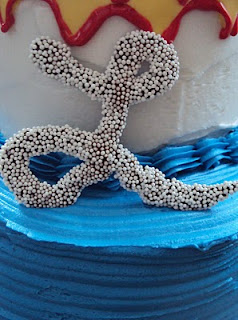 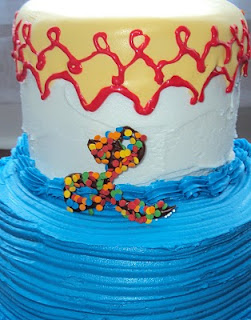 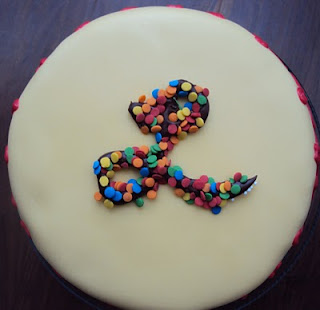 Every time I make something I think of it as a learning experience. I still consider myself really new at all this. But I really enjoy it and surprise myself each time with what I am able to do!
p.s. I wish I could have seen my mom going through airport security with the HUGE tupperware of cake I gave her to take back. This cake was so humongous and we could only eat so much in a weekend. I was SO NOT GOING to have ALL of it my fridge. Because I WILL eat it.