So, I tried out running with my pepper spray. Here's what it looks like: it has a little Velcro strap that you wear around your hand. It even has a lady running on the front of it!
**disclaimer:hand shown is not my hand. MY right hand has an Aggie Ring on it. BOO-YAH. **

At first glance, it did not seem like this would be the best way to carry it, so I tried it strapped on to my various things already attached to me (water bottle thing, ipod armband, watch, etc.) and after I practiced a few "quick draw" movements I realized, maybe they say to carry it like that for a reason. Because the clip CAN get stuck on the other strap thingy if you need to get it out, and that would not be very good. So, off I went, at thebuttcrackofdawn, all armed and ready. Yes, the part in my palm got a little sweaty, and I got a few weird looks, but all in all I would call it a success. OH! And of course I HAD to practice shooting it a little outside. And it's a good thing I did. My only other experience with this kind of thing was a HUGE canister of "Bear Spray" I used to carry when I worked at a zoo. That had a very powerful, very loooooong spray. It's was like a mini fire extinguisher. This thing squirted out a very dinky yellow stream of spray. So, my aim will have to be very good!!
Also, I bought this thing for #2 to use at the pool. 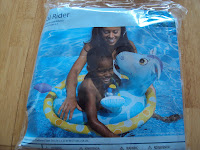 I've seen other moms using something similar, which is yellow, and a bit more sturdy than the mesh baby ring things that most people use for babies. But that thing has a 30 pound weight limit on it, and #2 is much more...um...sturdier than that. So then I found this thing that says 30-50 pounds. JACKPOT. And it was only $5! So, we'll see how it goes, I'm gonna try it out this week. If he's just in a toddler pool he's fine, but I need something for our neighborhood pool which doesn't have one of those. Usually he just stays on the steps with his puddle jumpers life vest thingy, which he HATES, and I want to get him used to being in the middle of the pool. Right now he is not on board! As soon as he turns 3 that child is going into swim lessons!
I have no idea what kind of animal this is, the package says "Donkey" but....I'm not sure...any guesses??
Also, we have set a date for our long-awaited garage sale. TWO WEEKS. ugs. The goal is to clear enough to purchase some extra free-standing kitchen cabinets that we will be able to take with us whenever we move again. I'm not sure that we will tho :( Because I am DYING with the 3 square inches of cabinet space I have. Almost all of my baking stuff and smaller appliances, casserole dishes, and holiday plates and stuff are still in boxes in the garage. AND, I have to park my car outside while working on this stuff, because our garage is so full we can only get one car in there anyway. And I KNOW it's not TX, but geez, it's been really hot here. Husband is a little tired of me complaining about the heat and says he's about to ship me back there for a week and that'll fix me.
In honor of our city's finest patrolling our neighborhood, here's a pic of a Police Car cake I made from a picture of a coworker of husband's boyfriend's squad car. It was a surprise and I hear it went over pretty well. 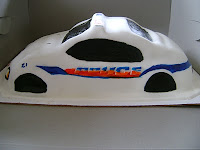 So we went to look at a prespective Pre-K for #1 this morning.
sniff.
The county school system here is apparently very good, but Kindergarten doesn't start until age 5, which is A WHOLE NOTHER YEAR. Not that I don't love having him at home with me, but ever since he turned 4 I seem to not be enough for him. He is so smart (I know every parent says that but MY kid really is a GENIOUS. His mind is a steel trap. I now know where MY excellent memory went before I had kids...) He gets bored with any activity after like 5 minutes. Which is a total pain. (sorry, but it is. It takes longer than that to get any activity set up). anyhoooooooooo........ The pre-K program is not state mandated, which means you have to "screen" your kid for it, and there's not that many spots, and they let you know like 5 minutes before the school year starts if you get in.

Here's the kicker...it's
::pauses for dramatic effect::
FREE!!
Most of the private preschools around here are really expensive. Is it like that everywhere? He's never been in anything like that, mainly because of that reason. For a few months at the beginning of the year, he went to a once-a-week for 2 hours "School Skills" class that was a drop-off thing, the first time he ever went to anything like that. And he adjusted pretty quickly. But, he seemed to get bored with that, and I felt like it was WAY overpriced for what we were getting. He's not been going for about 2 months now, and he's asked about it, like, once.

So we know that he really needs to be in a program like a 2 or 3 times a week all day school, just to keep him occupied and stimulated!! I know I will be sad when the day comes, and I NOT anxious for him to grow up. This is just the first step on his road to the White House. (so not kidding) We have no idea if he will get in (the free one), and we don't think he will. We don't really fit in any of the categories that get the priority, if you know what I mean. The one we would have to pay for seems really great, and I'm sure he will love it. So keep your fingers crossed, we'll probably find out in a few weeks. In the mean time, we have like 20 swim lessons to keep us busy!


So, in an effort to get all my "projects" on this blog, here's a pic of the cake #1 requested for his 4th birthday. A space shuttle cake. He did change his mind several times, but this is what he landed on. White House, right? 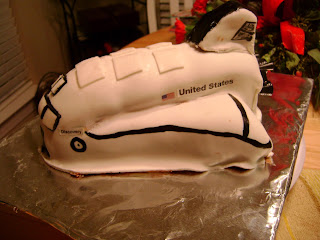 But my child will not.

We are finishing up Week 3 of swim lessons for #1. He is doing pretty well, considering the first week he just cried pretty much every day. He does well with putting his head underwater (a HUGE hurdle) and kicking his legs, but he is terrified of "falling" when attempting to float by himself. I know he will get it in time, he is just having trouble crossing this last mental bridge of knowing he can do it himself! I know he will love it when he gets the hang of it. His swim teacher is so patient with him but firm also and still dunks him under when he is whining about not wanting to do it, because she knows he will come up smiling!! He goes to swim class Mon-Thurs for 30 min each day. We just finished 3 weeks and have 5 more in front of us. I told the girl in charge of the lessons that we will need every minute of it! We are just going to keep on truckin' until he gets the hang of it.
So, until he does, I'll leave yall with this: cupcakes I made a few months ago for a coworker of Husband's birthday. Fishie cupcakes. At least someone in this house is swimming. 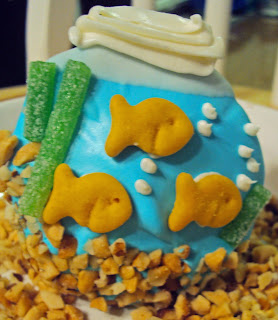 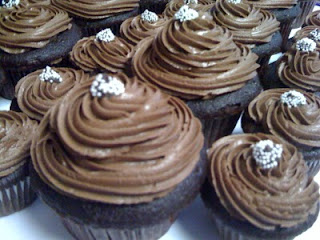 Baked Goods!
We had a busy weekend including lots of pool time and seeing Toy Story 3 with the boyz. I asked the husband what he wanted for Father's Day, and got the usual, "nothing, ugh." But he did ask for some baked goods, and he rarely asks for anything like that, so I got to work while he was napping! These aren't anything special, the cake is a mix from the box *GASP!* but the frosting is homeade chocolate buttercream ::pauses for salivating to stop::
So all in all a good weekend!
Posted by Jen at 8:30 PM 2 comments:

So, I'll leave my blog-debut-day with these random thoughts. Because my brain is like that sometimes. Well, more than sometimes. But mostly because I need some blog-practice.

I love a really pretty-ly made bed. (is that a word? I know, my Aggie education hard at work). I especially love MY bed. I love the colors, and I love the bed itself, all Iron and scrolly and 4-posted, and I love the new curtains we have hanging behind it. They were bought solely to hopefully drop the temp in our room a few thousand degrees because the window above the bed gets the afternoon sun, and even though I put black-out tint on it, it wasn't helping. But my $7 purchase at Ross wound up adding a richness to the room I never expected.

So anyway, today was wash the sheets day, and since I usually don't get to finish up the laundry until late, that usually means having to put the sheets on the bed late at night (ugh-what a beating). But, I can't just throw the sheets on it. I have to completely make the bed, tucks and folds and pillows and everything, even if I'm about to get in it. Isn't that weird??

And especially tonight, when I'm doing this late at night, and even though I will be getting up at 5am to run tomorrow am, I now have to take a shower. Because I am NOT getting in my beautifully made clean bed after being all gross from being at the pool all day. So now it's even later!
Does anyone else do weird things like this in the name of fashion? (Well, decorating, I guess, but that doesn't sound as cool)

p.s. I titled this post "Dear Journal" in honor of Sue Sylvester. Can't wait to see ya in the fall again, Sue.

So, I haven't decided exactly which direction this blog will go. Maybe it will be just "Family Updates", or maybe it will be about crafting and baking, or maybe it will just be about the things I'm into. So everything on here is a work in progress...including the title!!
Or maybe all of the above...
Or maybe I'll cook my way through Paula Deen's book and blog about that...
Until then, I'll leave yall with some cupcakes I made for Easter this year from "Hello, Cupcake!", the Best. Book. Ever. (yes, I have the new one but we just moved recently and most of my baking stuff is still packed in boxes! Damn my small kitchen.)
Anyhoo, I guess I should at least start by going live.... 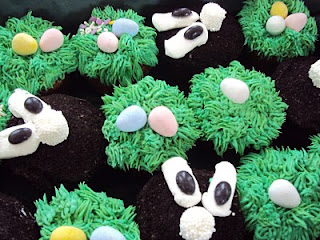