Only 7 more days until my 2nd 10k. Last year, I started running "seriously". I've always done it some, off and on. I've done a few 5k's (3.2 miles), for fun. I always do the Susan G. Komen Race for a cure, it is a well sponsored event and most of them I've done were in Dallas, where they are based, so it was a HUGE deal. I've also done them in Austin and Nashville. I never aspired to do anything more than a 5k. I've always known that running was sort of in my blood--both of my parents were avid runners when I was young, they still run now when they can, and my brother and I went to many races and did several "kiddie" races ourselves. But I never considered myself an "athlete". My brother got all those genes. But last year, we had just moved to a new state where I knew like 2 people. That's more than most people when they move, so I was grateful for that, but it got pretty lonely. I was at home with the boys all day every day. I "joined" a mom's group in that city (and when I say joined, I mean I joined, but never went to any functions. I mean, I'm not going to take my boys to ice cream at 4:30 in the afternoon. Those were the kind of things they did). We tried to brainstorm some things to do, but they all cost money (like mommy-and-me-classes, etc.) Running? FREE. (or until you get hooked and want running shorts in every color of the rainbow...but I digress). So one day, I informed my husband that I was going to go for a run. It turned out to be so cathartic and.....quiet. It was freedom from being stuck at home, if only for 20 minutes. It was my time. So a couple days later, I went again. You get the drift. I slowly started to enjoy it more than I ever have. I became a "runner". Ok, well, a "jogger". I'm not exactly Speedy Gonzales out there. But I'm out there!

So I did a 5k on July 4th. It was hot and it sucked. But, it wet my appetite to do races again. I need all the motivation I can get, and If I'm "training" for something, that gives me the discipline to get out there and do it. I don't do it for FUN. Quiet time, yes. Fitness, yes. Fun? NO. It's hot and sweaty and my feet are blistery and my legs are tired when I'm done. I am human.

So I started looking for another race to do in another month or two. Then I came across this one. I was going to do the 5k, like I always do. And then I got a wild hair up my bum. I thought, what the hell?? I'm going to try a 10k. I mean, it's only 6 miles. Roughly. I mean, I can do 3 with out dying, what's 3 more? So I signed up, found a training program in a book, and off I went. I set a goal: 70 minutes. (Ok, well, my real goal was to finish with out keeling over. Anything after that is gravy)

I "trained" running about 3 times in the week, for about 2 months. 2 short runs and 1 long run per week. Each of those increase a bit each week. That's all! I even ran in the rain. Once. And it didn't start raining until about halfway during one of my long runs. If it would have been raining at the beginning, I would have brought my ass right back home. I mean really. But I kept up, put my sweat towel over my ipod, and kept on a couple more miles. That day, I was all kinds of proud of myself.

We were off as Darryl Waltrip yelled "Boogity Boogity Boogity" over the megaphone. This is Tennessee, people. My final time was about 63 minutes. I about cried when I crossed and looked at my watch. (I don't look at it much when I'm running...or it won't move...you know). I beat my time! WHOOP! After that, I was like, OK. I can do a 10k. Completed. Back to 5k's!

I did a couple more 5k's after that, after taking A WHILE off, and was truckin' along when the worst bronchitis EVER hit me. 3 doctors and 8 weeks and tons of meds couldn't fix me. It was awful. 8 weeks is a freakin' long time to have a cough. Needless to say, I quit running. I had been planning to continue running through the winter, but by the time I was better, there was some SERIOUS snow on the ground. One look outside for this FL/TX girl and I was like..........uh uh. I wonder if I would have been doing it had I not had to stop running. Who knows?
So this year, it got warm again, I started running again. And instantly became happy again. When I stopped running, I was not as happy with myself. Those that do can tell you, it is a SERIOUS mood-enhancer. Really. So, once I got my groove back, I focused on doing the 10k. Again. What???
Things were rolling along until a few weeks ago, I was in a hurry getting the boys in the car and stepped forward on to a stroller wheel that my foot clearly didn't know what was there. My left ankle turned 90 degrees. The wrong way. Uh, ouch. DAMMIT. Just when I was getting in a groove! UGH! It wound up laying me up for almost 3 weeks. I ran a total of 3 miles in 3 weeks. That's down from about 10 miles a week, average. UGH. But finally I am back and feeling good. And now I have another wild hair. 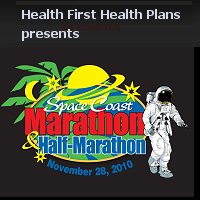 I've decided to try a half-marathon. My thought process is the same. My longest run now is 8 miles (which I did this Sat-go me!) and I didn't keel over. A half-marathon is 13.1. If I can do 8, surely I can do 13, right? I figure if there was ever a good time to do it, it would be right after my 10k. I mean, I'm already halfway there with my training. How hard can it be? And, I figure if I'm gonna do this once in my life, I'm gonna make it a destination race. Kind of like a destination wedding, but with out the cake and booze. Add to that we are HUGE NASA nerds, and it's in FL so the weather will be AWESOME and not cooooooold like here, and it's almost a done deal.
So I'll be blogging my way through the ups and downs, showing you that if I can run anyone can! And, that it is some hard stuff. I'm not one of those glamorous people who don't break a sweat and wear cute outfits. I wear what's comfortable, a visor, and I have a huge fanny pack of water bottles and sunglasses and energy gels and my phone and pepperspray. And I sweat. Alot. Hot? Nope! But as long as I make it home, I consider it a success.
I also need to add that doing anything more than "recreational" running requires alot of support from your spouse and family. Because sometimes, you need a swift kick to get out of bed at 5:30 am, even if it's raining. And sometimes, having to log in a ridiculous amount of miles on your husband's day to sleep in will require him to get up with your children, because you're gone so long. My husband has been very supportive of me, and I want to thank him for the past and future support!!

I got my running schedule in my calendar, all I have to do now is sign up. :)

Oh, and Also? in 8 weeks I will be in Hawaii for my brother's wedding. Destination wedding. So some of my "training" will have to be done there. Running. In Hawaii. On the beach. (It would be like a movie except the part of me would be played by Jennifer Garner.) I can think of worse things! More on that another time!!
Posted by Jen at 2:13 PM