This meal knocks out 2 at once in the book. The basic recipe for chili is pretty much just the beef and spices, and then it gives you an option to add beans. Which I did, it's just not chili with out them to me! The cornbread starts with making the batter and cooking it for a minute in the cast iron skillet in the stove, the transferring it to the oven for 20 or so minutes. 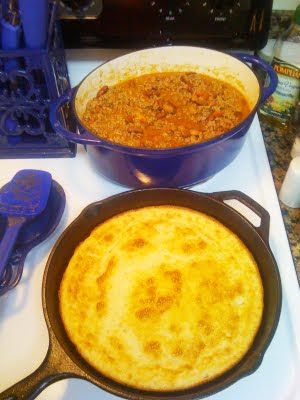 (just after I took the cornbread out of the oven) 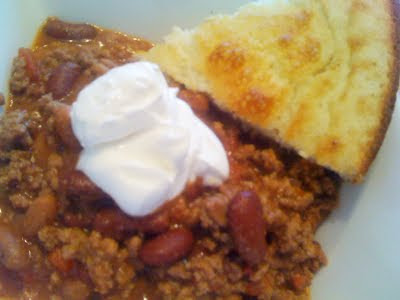 All in all, this was pretty good. But, not being the biggest chili eater, I'm not a fair critic. I'm not a big eater of red meat in general. And, I have a turkey chili recipe that I like much better, from cookbook called "Cooking for Your Man" or something. It's all soul-food type stuff. The ingredient list is like a mile long, but it makes a ton and I always have some left to freeze. Plus I just love the title of it :)
The cornbread was just okay for me. I'm not a big fan of cornbread either. All the cornbread I've had in my life has been from Cracker Barrel or from the Jiffy box mix. It was very fluffy and buttery tasting, considering there's not any butter in it. It also was very grilled-outdoorsy-campfirey tasting, due to making it in the skillet. I'm not all the way sold on this cast iron thing yet. Alot of the black stuff comes off on whatever I'm cooking. Is that normal? Is that healthy? I really want to like it, I'm just not there yet.