I was going to combine this with another post, because just grits as a side dish don't seem to warrant a full post. But what happened was just comical enough to change that. I've been dying to make "Shrimp and Grits" at home for a while now, so this gave me an opportunity to do that. 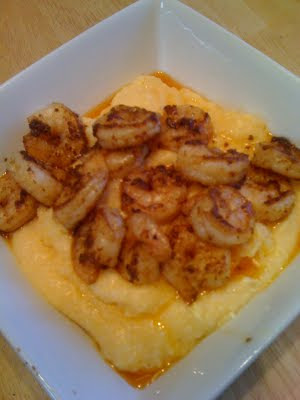 I think most people have heard of grits. They are pretty common in the south. It's kind of like oatmeal, but made from corn I think, that's the best way I can think of to describe it. The only time I've had them has been out at a hotel breakfast or in a restaurant with shrimp. I used to have the instant kind for breakfast when I was a kid with jelly mixed in. I'm pretty sure grits are the only thing I'll take sweet or savory. Usually I'm one way or the other on most foods. The kind I got in a canister were not instant, but quick-cooking. This recipe calls for 2 cups of dry grits and baking them in a large pan. When PW, queen of the massive portions, calls for a large dish, well, that should have been my first clue.

Here's what they look like after boiling them with water. I figured my large-ish pot would be big enough. So far, so good. 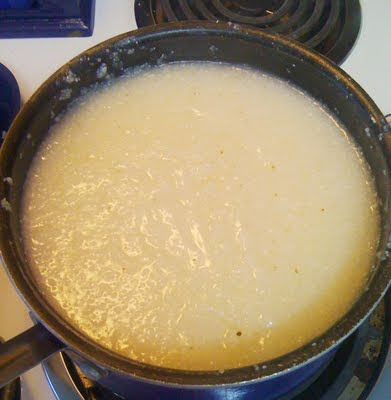 After they are done, then you start adding eggs, 4 of them, and butter. A lot of butter. Like, 12 tablespoons. That's a lot, even for me! After that much butter melted into it, I started getting concerned about my pot size. I still have a buttload of cheese to add. 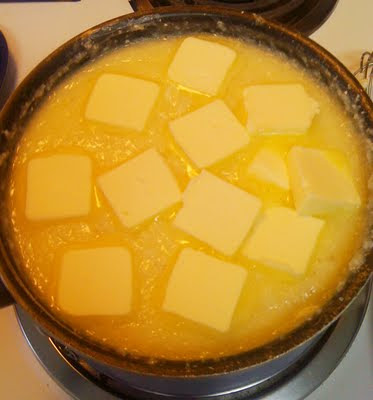 Now to start adding the cheese. I started with about a third of it, stirred it up. Then the second third. I weighed out dumping out into a larger pot or just seeing if it will all fit and avoid dirty-ing up another dish. Then when I put the final third in, well, you can see what happened. 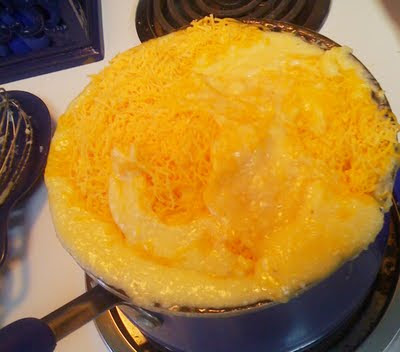 So, I dumped it into another pot. Not without getting grits all over the freakin place. 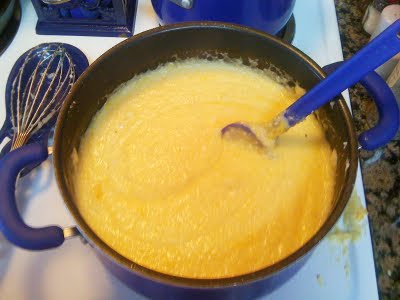 Yep, you guessed it. My original, pre-buttered casserole dish didn't even come close to holding all of it. It almost didn't fit in 2 dishes. Into the oven it goes. 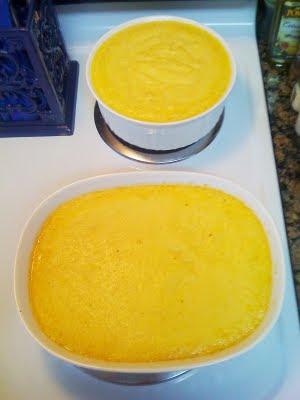 These turned out pretty good, albeit swimming in oil around the edges when I took it out of the oven from all the cheese and butter. It has some spicy spices in it, but I could have handled way more. I made up for it with the shrimp....I sauteed them up with some butter, cayenne, old bay, and salt and pepper. They were really good and spicy.
I also kept in mind the whole time this dish got bigger and bigger, that I'm the only one in the house who's going to be eating them. The husband likes neither grits nor shrimp, and I haven't had the boys try any yet. It's something new, and some days, you just aren't up for the dinner time fight, you know? So I divided it up into ziplocs and put most of it in the freezer. We'll see how it keeps. The total amount of grits I think came out to around 12 CUPS. TWELVE.
Posted by Jen at 12:15 PM