My First Trip to Trader Joe's!

Last weekend I made my first trip to Trader Joe's. We only recently found out there was one here, but it's super far from where we live and not convenient at all. That's probably not a bad thing. It was SO AWESOME!! I thought the prices were pretty good. One thing I did find weird, most of the produce was priced per item, not per pound. Like individual bananas, apples, peaches, etc. were like 50 cents each or something. Wonder why they do that? 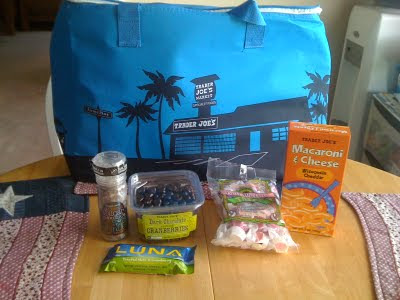 this was my haul...minus a water bottle and a package of "licorice dogs"....little scottie dog shaped black licorice pieces. My hub said he had them growing up in Australia and they are different than any other kind of black licorice. I asked him how so and he said they just are. Whatever, I can't even stand the smell of black licorice so what do I know!

This includes....dark chocolate covered dried cranberries, salt water taffy, TJ's mac and cheese, a new flavor of Luna bar, and and grinder thing-y of coffee beans, chocolate pieces, and white and brown sugar. I'm not exactly sure what you are supposed to use it for, but when I saw it it screamed at me "THIS WOULD BE AWESOME ON A CUPCAKE!!!" So, I picked him up. Oh, and an awesome extra large cooler bag. Because you can never have too many of those.


I already made the mac and cheese for the boys, it was pretty good. It doesn't taste like the "real" stuff in the blue box, but it does taste like the Annie's version. I think I like it better than the Annie's anyway. And it's dye-free, which is something we (I) are working toward for the boys. (I've already pretty much eliminated Red 40 from their diet when we are at home, but when we are out they still get a little.)


All in all, it was a really cool little store. I'm not sure when we will be going back. But when we do, is there anything else yall can recommend? Esp for kids?
Posted by Jen at 7:14 AM

Email ThisBlogThis!Share to TwitterShare to FacebookShare to Pinterest
Labels: food, just for fun