This past week I ventured more into the "meals" sections of the book and out of the "desserts" sections. I know, right?

I decided to make the Pot Roast. This may come as a surprise, but I've never made it before! I'm really a complete novice still at picking out red meat in general. I'm never sure if I'm getting the right thing. I think most people make this in the crock pot, right? Mine isn't very big, certainly not big enough for all this. This recipe calls for slow cooking in a low oven. I have only 2 things that can go from stove top to oven, my cast iron skillet and this, which is cast iron also with an enamel coating. I seriously doubted it was big enough to hold everything. As you can see, it barely was!! First you brown the meat, then the onions, then the carrots, then everybody back in the pot with some fresh herbs and broth. 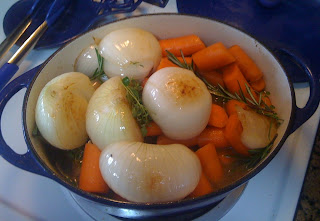 Here it is after 3 1/2 hours. It was supposed to take around 3 hours for the smaller size of roast I chose, but I decided to add an extra half hour just to be safe. 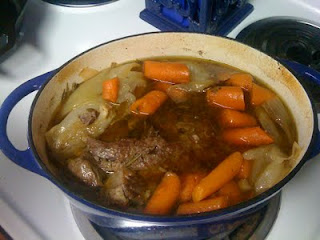 I made some mashed potatoes to go with it. I figured they were pretty much a necessity! I didn't make the "official" PW potatoes, I went a bit simpler and more rustic with skins on and much less butter. 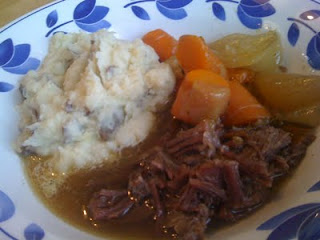 I'm fairly new to this dish, so I don't have much else to compare it to except for the couple times I've had it at Cracker Barrel. This was way better, if I do say so myself. Or PW's self. I kind of tried to scoop a bit of each thing on every bite. YUM. Since I chose only a 3-ish pound roast, there wasn't much leftovers, only about 3 servings. I had one last night. Still amazing, even after being in the fridge for a few days!!! I will DEFINITELY be making this again, and in much larger quantity!!