Ha ha. I toyed with the idea of not putting "fish" in the title of this post, but I didn't want to cause too many heart attacks! We still don't know what the sex of #3 is yet, I haven't even had the u/s yet :)
Blog, meet "Coconut" 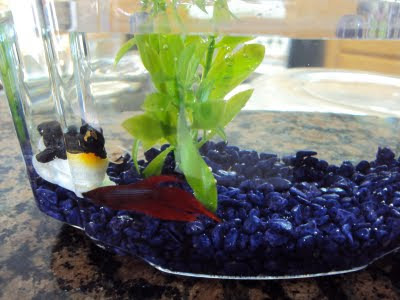 This morning before swim lessons I told #1 that if he could float on his back by himself today (or whenever he decided he could do it) that we would go and get him a fish. His very own to name and love. He was quite excited about it. We are in year 2 of swim lessons, we are just finishing up the second week.
We did 8 weeks of swim lessons last year, and floating much less any swimming has been a long uphill battle with him. He was a little unsure the first few days of lessons this year, and I really wasn't sure where he would pick up after all the progress he made last year. He has come quite far in just 2 weeks! I think realizing he can touch the bottom in the shallow end and have his whole head above water has given him some serious confidence. He does really well in lessons, and has playtime with his ring also.
Wouldn't you know it, he floated today!! It's a good thing I was wearing my sunglasses because I was definitely choked up. What a long battle for him. I am so proud! So promptly after lunch, we went to the pet store and he picked one out. Unfortunately he has inherited my indecisiveness, so I think he got a little overwhelmed with the choices on the beta shelf. I wound up having to pull 3 down, one of each color, and let him choose from those. He decided on the name "coconut" on the way home, don't even ask me where he came up with that. Funny kid!
Posted by Jen at 2:15 PM

Email ThisBlogThis!Share to TwitterShare to FacebookShare to Pinterest
Labels: swim