This weekend I completed my 2nd half-marathon. In 3.5 months. Who am I ??? Seriously, yall, this is someone who N-E-V-E-R planned on running more than a 5k. Like, that was me last summer. I took the plunge and signed up for a 10k, then a year later another one, and that was it. Maybe it got in my head I could do these because I'm thinking....TENk...that's almost 13 miles... when, uh, NO, 10 is 6ish miles, it's not even the same thing! But here I am! And...deep breath...I'm thinking of doing another one. In 6 weeks. The Country Music Marathon and Half is pretty much the biggest race of the year here. I did this one because I just didn't want to wait that long. After that, though, I might have to take the summer off from the LONG distances because I don't do that well in the heat.

Here is me before the race. It started and finished at the stadium where the Titans play. All smiles! 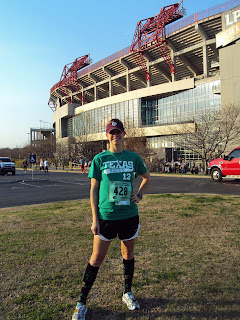 And, since it's the weekend before St. Patty's Day, I had to green it up, yall! You KNOW I have Aggie shirts for every occasion. Because, why not? I liked that the numbers were green too. They even had a bag pipe guy playing as the different races left.

(I thought bagpipes were Scottish, but who am I to judge...It was still cool. My maiden name is Scottish and I married an Australian guy with an Irish name...pretty much a lateral move for me in the name department.)

This is where we came in to finish...the back left corner of this pic, down around the other end of the stadium, then back up to finish. And they showed us up on the jumbo tron and called out our names :) 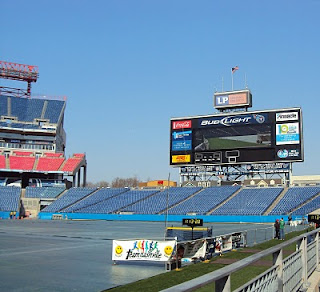 Guess who that is? My Mile-2 running buddy, Dave Ramsey. You know, financial guru who my hub's borderline...well...let's just say he's a big fan. We've been doing his plan for a little over a year now and have made great progress, but we're still in Baby Step 2. (Look it up.)

Hubs said he's been hearing Dave talk about training for a race on his radio show, and talking about it like it was coming up soon, but I figured it was the next one (C.M.) And then, low and behold, just after the first mile marker, I hear someone say his first name behind me and then he spoke-and I recognized that voice! I couldn't believe it. I was all, my H is not gonna BELIEVE this!!! So then I had to quickly decide whether to bug him or not. I did. I totally ran over to his side of the road like a big nerd and told him my H was a big fan and we are making good progress, blah blah blah. We ran together for a while and had a nice little chat. At one point we were talking about upcoming races. He was all, 'I'm doing the Country Music' and I was all 'oh me too!'. Around mile 11 I was re-thinking that comment! Funny-I don't think I even told him my name! So then, when we split off, I'm trying to gague when's enough distance to not look like a total nerd so I can text the hub and tell him. I wound up just texting Dave's number so he could look for him and what he was wearing. He thought I had just thought I'd seen him and replied, yeah, that's him, saw his name on the list. I saved my little nugget of info about the conversation until I could tell him in person. Good times. :)

So there he is finishing, about 10 min ahead of me.

Here is me trying not to collapse as I bolt toward the finish. I was seriously out of gas. I was so focused I didn't even see my fam. And? my ipod died. Again. Froze up. At mile 6.5. It's what I was afraid of...It's been on the fritz. That's a freakin long time to have to listen to the stupid crickets and bullfrogs in the park we were running through. I am a person who needs that distraction. I took my ear out and tucked it in my shirt like an angry singer who's ear things aren't working during a performance. And? Because of that? It didn't save any of my hard-earned mileage for my nike+ account. GRR! 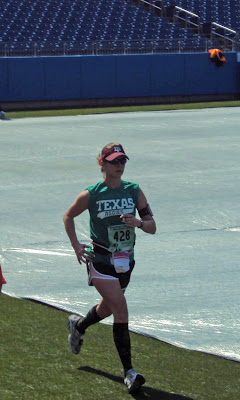 Me after with my medal-green too! 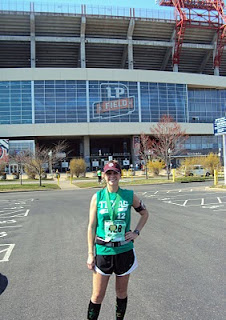 In other news, many of you know already, but my oven has kicked the bucket. Thursday I was in the middle of making PW Meatloaf, mashed potatoes, and cobbler. It was not good. I was not happy. A repair guy came out today and has to now "track down" a part for it. So there will be no Irish soda bread or potato bread or shamrock cookies or cinnamon rolls or pretty much anything from the PW or Paula Deen book until it gets fixed. There's like 3 recipes in the PW book that don't require an oven, so I'll try to work on those in the mean time. Friday night I made the PW mac and cheese, which has a bake option at the end, but I just cooked it all the way on the stove. I didn't take any pics though, because I was still pissed at the oven. I'll make it again. It was pretty good!
Posted by Jen at 9:05 PM