This weekend I tackled one of the more time-consuming recipes: the Enchiladas. Holy bazillion steps. Cook the meat, make the sauce, fry the tortillas, dip the tortillas in the sauce, assemble, bake. Much different than my own enchilada recipe, and it has beef in it (first for me, I usually use chicken). This is definitely not something I could manage during the week with the banshees running around. 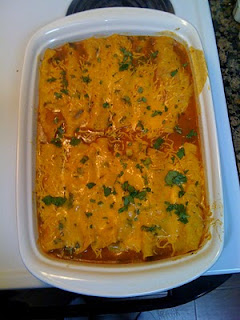 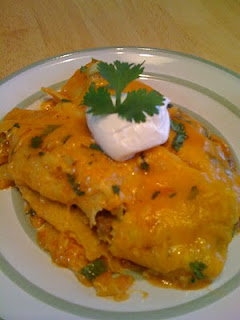 They were pretty good, but at the end of the day, I still prefer chicken. Bygones.

I also made these to go with. I halved the recipe, since I knew I would be the only one eating these. My hubs has gotten A TON better about trying new things, but this kind of thing is a no-go for him. I'm the only one in the house that likes spicy things. I mean, I put Frank's or Tabasco on ever.y.thing. I think #2 will be my partner in crime when he gets older. 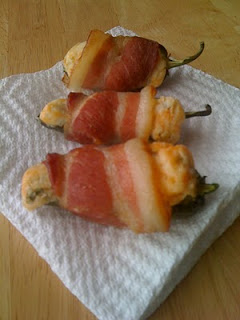 The recipe calls for basting them in BBQ sauce after wrapping in bacon, and I took licence to not put it on there because I don't really like it very much and they're just for me! The filling is cream cheese, cheddar, and chopped green onions. They are really good, I mean, I don't think I've ever had a bad stuffed jalapeno, but I'm not sure I like them more than the fried ones.

This entire meal is just begging to be consumed with some Bud Light or margaritas. But we had none. Piss poor, I tell ya. I really need to start planning beverages!