This week, the final class, we spent the first class practicing a few different kinds of borders, and then a basketweave technique like you would use the sides of a cake if you were making a basket theme cake. Honestly, I thought I would be able to do that no problem, I've seen it before, but it was harder than I thought! It took me 4 times of wiping my practice board clean and trying again to "get" it. Then we had the rest of the time to decorate our cakes.
I came up with a design, finally, earlier in the week, and got to work mid-week on the flowers I wanted for my cake. Originally I wanted to do an all-white, bridal type cake. White cake, White frosting. After I made the flowers, I decided they'd look better against an off-white, but not colored, background. 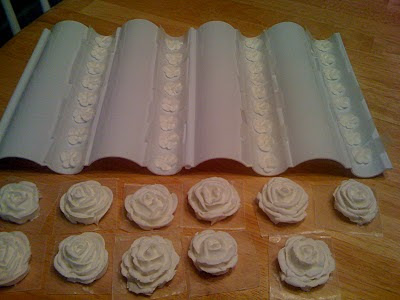 I started out with a 9 inch vanilla cake with vanilla buttercream on the inside and a newly invented Mocha Buttercream on the outside. If you like coffee, or coffee ice cream, then you can just imagine how good it is..... 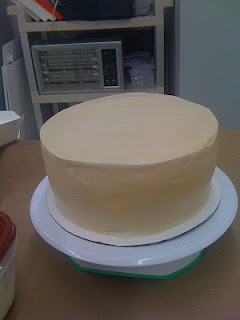 I added my scrolls first. This is the first time I have ever tried anything like this. I've seen it lots on tv, and my own wedding cake had some on it as well. There are templates you can get that will imprint a design on the cake for you to trace, but I just free-handed it. 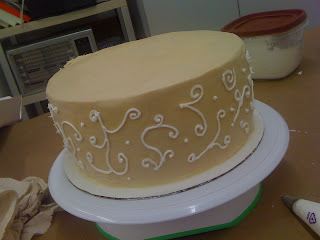 then I added my flowers. 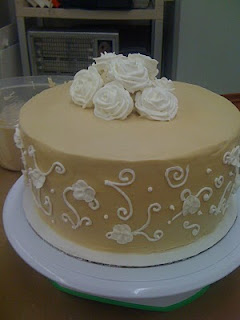 I added a simple border at the top and bottom, and am now ready to take home and share except...my roses made my cake just about 1/2 inch too high to fit in my cake dome. DOH! So, how to get it home on the 30 min drive? I tried first to leave it on the base of my cake dome. I secured it best I could and... 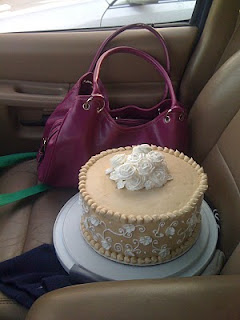 I didn't even make it out of the parking lot when I knew I had to think of something else. It was sliding around all over the place. I moved it onto the base of my turn table, which has a bit of a non slip rubbery ring on it. I wrapped my jacket around the base and wedged my purse in there too. It didn't move as much, but I still had to use my fingernails to hold the base the whole way home, switching positions around the cake depending on which way I was turning or braking/accelerating. It was a long drive! Comical! 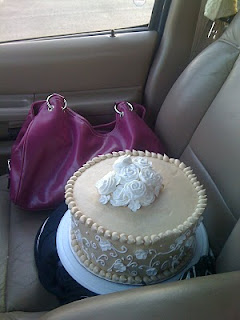 But, I made it home! I snapped these quick pics and then promptly took a butcher knife to it and gave my neighbor HALF the cake. There is no way we need this much cake in our house! I still have about 1/3 of it left, and I'm giving it away as best I can!
BTW, I did actually have some of this cake. It's the first time I've eaten any cake I've made in a long time! It's so rich though, I could barely eat anything with any sugar for like 4 days! That's saying alot for me! Also, I usually don't have to cut into the cakes I make...this one was hard to cut! 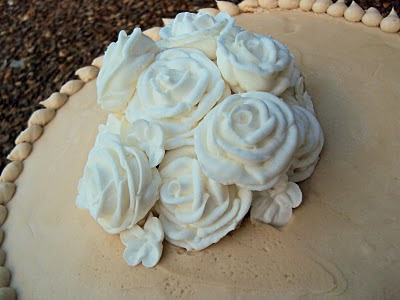 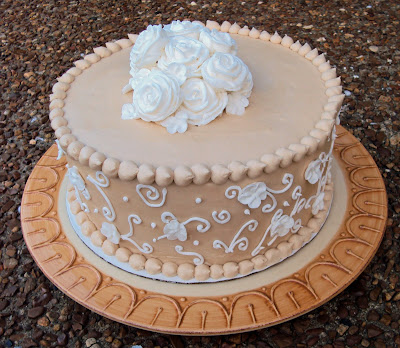