Let's start with this. I love coffee. Like, for real. I can't have as much of it as I want, because I am pretty sensitive to caffeine. I can't barely even have a coke after 6pm or I'll be up all night. My love affair started in college, with the International Foods ones, or what ever they are called. You know, the ones in the little red and white cans that used to have the commercials with the ladies sitting on the porch screaming about "Jean Luc!!!" After college I graduated to the hard stuff, i.e. Starbucks. There was one several doors down from the vet clinic I worked at, so I would just skip down there and get some almost everyday. And I pretty much always got a "free" upgrade in size, thus a monster was born. (I swear they did it on purpose) Then, when I moved up to the DFW area and started a real job with real expenses, I soon figured out I could no longer afford my Starbucks habit. (boo)

So for several years I didn't have it very much anymore. I had a coffee pot at home, but you know, that's so much....work. And I have to put the cream and sugar in it myself?? It wasn't until after I had my 2nd child that coffee, made at home, became a requirement to start my day. I felt a fatigue I never had before. And, I realized that I could make my cup at home for a mere 25 cents instead of $4. I still bought Starbucks ground coffee to make at home, because, I'll admit it, I'm a coffee snob. I'm also a donut snob. Don't judge I have since seen the light and made the switch to Dunkin Donuts Coffee, it is not quite as strong as Starbucks and doesn't have the bitterness the Bucks can have.

I also like iced coffee, but never make it that much. If I do get it mixed just right, I drink it so fast I can't even enjoy it. It's embarrassing really.

So, last week I finally started following The Pioneer Woman's site on FB (I know, what?) and she posted this here about how she makes her iced coffee and why to do it this way. Let me just tell you, when I read this?

I kept dividing the amount in half until I got to a reasonable amount to make just one or 2 servings of it to start. And I have to make it with decaf....boooooooooo.

(In the am's now I have half-caff because I'm pregnant. I didn't have much caffiene when I was preg with the boys, but now, it's just a necessity. I tried straight decaf in the am's, and it just didn't cut it. I know I have have one regular sized cup of regular coffee a day and be under my milligrams of caffeine (I carefully keep count) but if I do that then I can't have any the rest of the day...and sometimes I need a cherry coke at 3 or 4 to make it through the day!)

It was so good that I am currently waiting on a much bigger batch to be done. And I had to get a new cup (one I've been waiting for an excuse to get) to house my new daily afternoon decaf (boo) treat! 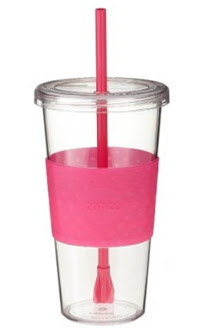