I had 5 peaches left from the 2nd batch of ones I got at our new Whole Foods last week, which were amazing and I'm not even a "peach" person. They were on they're last day of edible-ness and need to be used. I was flipping through my PW book, (again, with the desserts) looking for the cobbler recipe. I really should have it memorized by now. I came across this one for Peach Crisp, which is also very cobbler-y, but in a more traditional sense with the fruit on the bottom and crust on top. I made a quick check and I had all the ingredients. Let's roll!

In a bowl you combine all the dry ingredients...flour, brown sugar, regular sugar, cinnamon, and nutmeg. Oh nutmeg. see the brown stuff on the left? That's it. The recipe calls for a dash of nutmeg, which is so strong that's about all you ever use in a recipe anyway. Anyhoo, I'm still not used to the new tops on my spice containers, and unscrewed the top thinking that the "sprinkle" top would be on the bottle instead of in the lid. So I gave it a dash and OHMIGOD like half the little bottle emptied in my bowl. It's a good thing I like the smell of nutmeg. I managed to scoop most of it out, but I'm pretty sure there wound up being more than "a dash" in there. There are worse things, I guess. 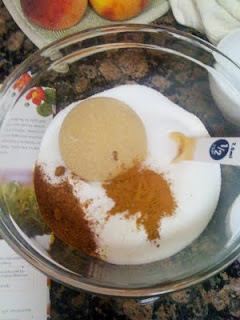 After that gets mixed together you have to combine it with the butter with a fork or pastry cutter (nope, still don't have one) (also still don't have a new larger food processor yet, and this was more than my little one could do). So I used the stupid fork method and it took forever. ugh. It wasn't completely uniform, but my boys will only play with their play-doh for so long. 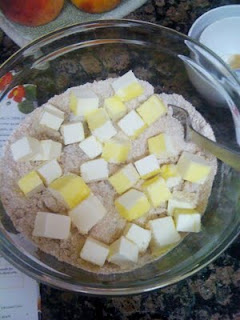 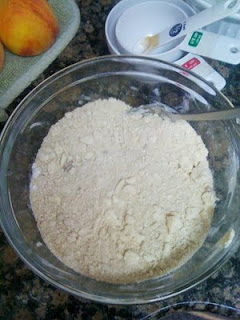 Then I sliced up my peaches. They are supposed to be peeled, I'm not exactly sure why, but they were over ripe and very juicy and after I got the first one I was done with that. And I was running out of play-doh induced free time. I put the rest of them in there and said a little prayer it wouldn't ruin the recipe. Toss them with lemon zest and juice, and maple syrup. (I'm pretty much the biggest fan of lemon zest you'll find. 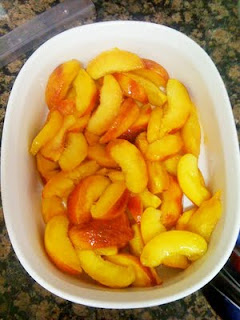 layer the other stuff on top... 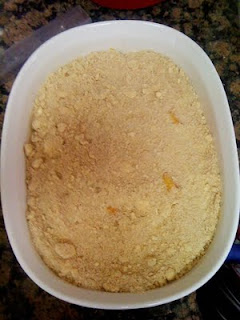 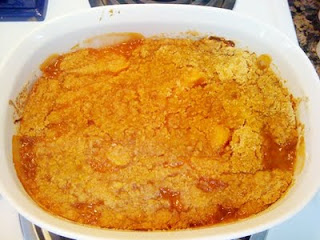 There's a second part to the recipe. A maple-cream sauce to drizzle on top. Now, this doesn't exactly trip my trigger as much as vanilla ice cream or whipped cream would. Some people just die over things like Maple Pecan Ice cream. Me, I'm a chocolate girl. But, I made it anyway. Pretty simple and not a very exciting picture....Heat up some heavy cream and maple syrup and cook it down a bit. Then you let it chill for a while, and it thickens some more. 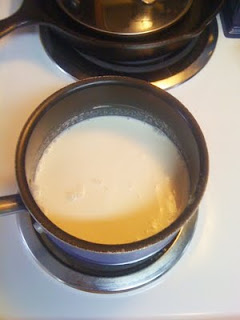 (and the skins on the peaches weren't that big of a deal. didn't bother me.) 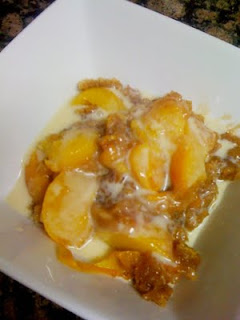