So....I seem to be focusing on the dessert section of this book...can't imagine why. I've already made this same cobbler twice, in the quest for finding which of my dishes is best for it. One was too small, one was too big. (read about them here) So, obviously, I had to try again. This time with blackberries. (note: the recipe is "officially" called Blackberry cobbler, but says that you can also use blueberries, raspberries, peaches, and so on.....so I figure I pretty much have to make all of those to complete this recipe.) 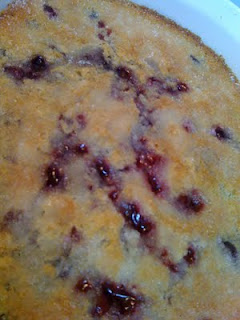 We finally have a winner folks. I love this because the recipe is so simple, there's only milk, butter, flower, and the berries pretty much.

Also...we had a ton of blackberries because we got them from Sam's. Before last week, I'm pretty sure I've never eaten a blackberry in my life. I've only had a fresh raspberry a couple times. They kind of freak me out with the tiny cluster and the little hairs sticking out. I'm wierd about food like that...I like a lot of things, but it has to be visually appetising to me before I'll try it. So, I ate my first blackberry...and I liked it! It tastes like a grape I think. But I'm still on the fence about the nobbly texture, so we won't be having them all the time I don't think. The boys liked them also, and I'm always trying to expose them to all kinds of food at a young age.

can we please note.....I remembered to take a picture BEFORE digging into it! Yay for self control!