Okay, yall. For real. I need to get out of the dessert section of this book.
(okay, technically this is in the breakfast section, as in like a coffee cake, but even I draw the line at serving this for breakfast. er, um, to my kids, that is....)
The concept of "prune cake" is not totally foreign to me, I remember my mom making it when I was younger. And, I happen to like prunes. Yep, I just said it out loud. They're like really big extra sweet raisins. But I think they just aren't something people have laying around their houses. And they get a bad wrap too....like "only old people eat those!" So if you are a fan of dried fruit and have never tried one, you will probably like it! 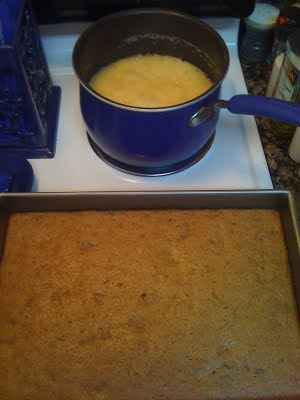 (warm cake patiently waiting for caramel to finish)
This cake was un-bel-iev-a-ble. I followed the strict instructions not to overbake it, because it's supposed to be moist. I was expecting it to taste somewhat like gingerbread, because of the spices in it (nutmeg, cinnamon, allspice). Which it does. Which is not a bad thing. It is like, gingerbread with raisins. The topping is a caramel sauce made from cooking down sugar, butter and some other things. I've only done this once, when I made caramels at Christmastime, so I knew it was going to take longer than the book says. Good thing I started early. You pour it on the warm cake and then have to waaaaaaaait for it to cool. The caramel sets and winds up being more like a topping than a sauce, which is a-okay with me. 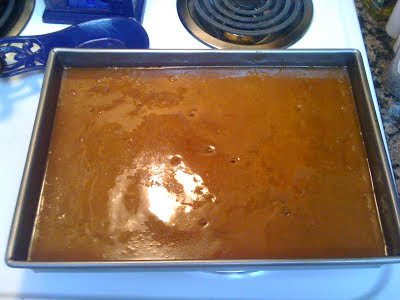 (cake and sauce cooling and waiting to be eaten) 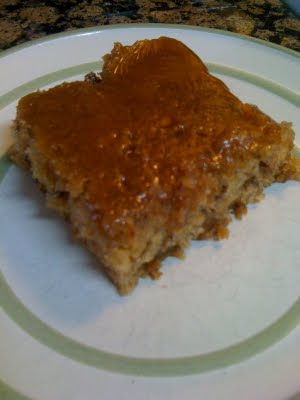 (and, for the record, we do happen to have prunes in the house when I'm pregnant, because those of you that have been know, pregnancy has many blessings...I'm not saying, I'm just sayin.)
Posted by Jen at 7:00 AM