The second thing I tried with the mandoline was vegetable chips. I've seen these in a bag, so they can't be that hard, right? WRONG. I'm really trying to avoid frying them. Here's my first attempt: Zucchini.
This is all from ONE zucchini, sliced at 1/8 inch. Wowza! I sliced them up and layed them out on parchment. 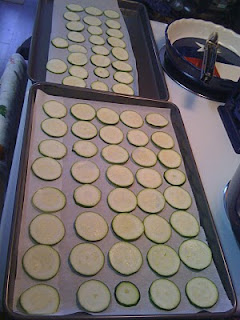 I put some S&P on them. I meant to toss them in EVOO, but forgot. I don't think that made the difference, we'll see next time. 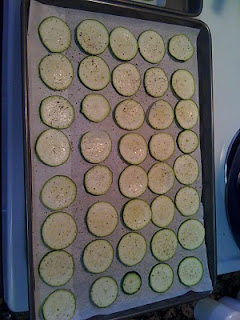 Same thing as with the apple chips: 350, 10 minutes on each side. Here's what I was left with. They look pretty good in the pic, but they were actually not crisp at all. I'm not sure why! 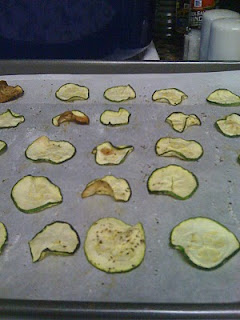 I was really planning on having those with our dinner, and they didn't turn out. So back to the interwebs I went, and found this recipe for Zucchini chips. Except, they aren't exactly chips, more like a "parm", like chicken or eggplant. Whatevs. It was good. Here's a simple breakdown.
Slice up one Zucchini to 1/4 inches. I think you could do this with a knife pretty well. Let them dry out on a paper towel about 10 minutes.
Combine in a bowl:
about 1/2 cup grated Parm cheese
about 1/2 cup italian breadcrumbs (or plain then add some parsely or whatever spices you like)
salt and pepper
dash paprika (optional I think)

In another bowl, scramble an egg. I did just one, for one zucchini. One was enough for me and the boys.
Coat the slices in the egg, then in the breading.
Layer on a baking sheet, WITH parchment, and bake in a 450 oven for 5 minutes, then flip, then another 7.
These are great by themselves, or with some Ranch or Marinara. YUM. And I'm not that much of a zucchini lover, unless it's grilled. That pretty much goes for all veggies, although I'm getting better.
These reminded of something you'd get on the appetizer menu at Chili's or Friday's :) 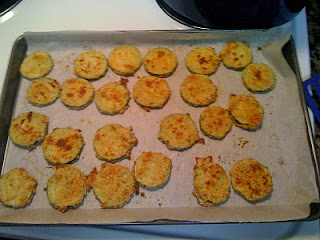 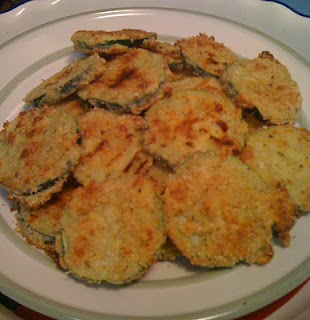