So here are the side-by-sides I was talking about earlier. After this I'll leave Halloween be!!
This is the pattern I used: McCall's MP373. I know the pic is tiny, but you can see that it is one pattern with different ears, tails, and other add-ons for a basic jumpsuit.

This is the only Garfield costume I could find online. Basically I made the jumpsuit out of orange material, and got some black cut to make the stripes, etc. Then, by using this picture and pictures of the actual cartoon on line, as a guide, I made all the details. 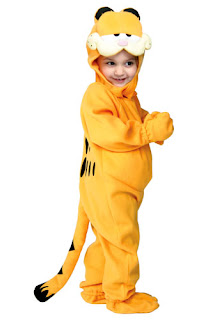 the face part I made separately, sewed a back on it and then stuffed it, then hand-sewed the corners to the hood. 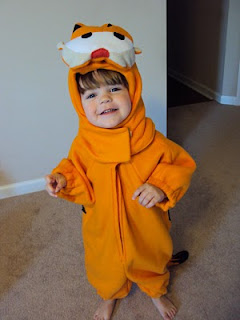 I hot-glued on all those stripes on the back. I cut out diamonds of the material, then cut those into strips.

Here is the picture of the Odie costume. I did sew spots on the sides, evenly, unlike this "Odie", but you can't even see them in any of the pictures! Also, after some debate, I wound up sewing the "tongue" part on the inside of the bottom velcro hood closure, so it flips over the upper outer edge. (same position as here but you can't see any of the khaki hood at the top of the tongue). There is also a short tail on the back. The ears I made separately, stuffed inserted a section of wire hanger so I could bend them later, then sewed them into the hood. The eyes and nose were made and stuffed separately then sewed on top, and to the ears to keep it all together. The previous halloween post has more pics of the costumes themselves. 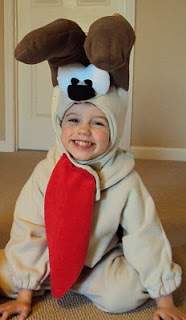 So, both these costumes would cost about $150 if ordered online, because they aren't available in any store. These are the materials I started out with, and they cost $50. 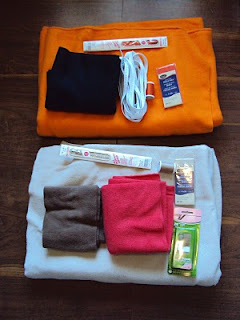