I sense this blog becoming a little bit more food-driven in the coming months, I blame it on new kitchen gadgets and the upcoming food-centric fall/winter months. So if you're not into that sort of thing, bear with me! There will also be alot of pictures, because I think that's the most important thing when you are trying to learn something new!!
One of my bday gifts was a Mandoline, which is a fancy name for a slicer. It has a fixed blade and a "runway" that allows you to make uniform slices at a variety of widths. The blade also rotates to expose thick and thin julienne blades too. If you don't have a mandoline, some regular cheese graters have a straight blade on them. I'm not exactly sure how thin it slices, I've never really trusted my self to use it. And it isn't big enough for me. The mandoline I have is pretty fancy, but Bed Bath and Beyond sells a little hand one for like $15. Or, if you have MAD knife skills, you could try with just a butcher knife. I don't have the best track record with knives, so that option is OUT for me! I think it'd be worth it if you are interested in trying out to make some of these homeade snacks.
The first thing I wanted to make was Apple chips. The boys love the ones you can get in a bag, but homeade is always better, and cheaper, and I figured they couldn't be that hard. I looked up a few recipes on line, and they vary wildly. Usually it's a looooong time at low heat (like fruit leather) or shorter time at higher heat. I found one a weight watchers that only took 20 minutes at 350. Sounds good to me!
The first thing I did was slice the apples. I used Fuji, I usually prefer them or Gala. I think you can probably use any kind! (Turns out, they slice better if you start with the top of the apple facing down). You don't have to do anything with the core, just brush away any seeds. Then I added a little lemon juice in the bowl to coat them and added a mixture of 1/2 cinnamon and 1/2 sugar. Not very much, just enough to coat. I have a shaker that I keep full of this year round.
One apple= One batch. 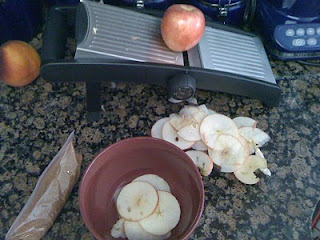 Then I laid them out on the cookie sheet. I was a little on the fence about whether to use parchment or not, I usually always do, but didn't this first time. I should have. 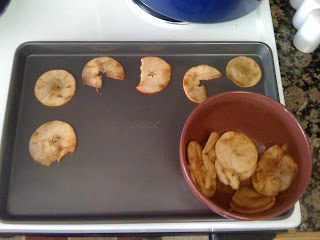 Bake at 350 for 10 minutes. Then turn them over, then another 10 minutes. See how I have the oven propped open with a small towel? Anytime you are doing anything with drying out fruit, you need to do this to let the moisture escape from the oven. 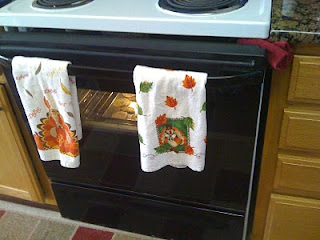 Hmmmmm, not so great. I mean, they tasted good, but alot of them burned. Hmm. Also? They don't need any sugar. I forgot how naturally sweet dehydrated fruit is. Just cinnamon next time. 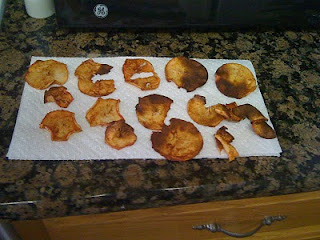 Here's the next batch. On parchment. I also tried sprinkling the cinnamon over them instead of coating them. 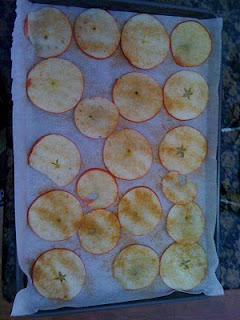 This is them after 10 min, flipping, then another 10. What a difference the parchment paper made. I decided to cook them another 10 min. 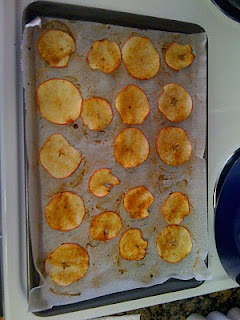 Some of them still burned a little, but over all the batch was much better. Supposedly they will crisp up after setting out for a few minutes, but mine didn't really. And these were the thinnest cut, 1/8 inch. The were SO yummy though. Great for snacking or long trips in the car because they keep awhile (not exactly sure how long yet) and don't have to be refridgerated.
If any of you have ever tried this and have any tips, let me know! Like how to not burn them! Supposedly slicing them all a uniform thickness is supposed to achieve this, but I still had some burn anyway! 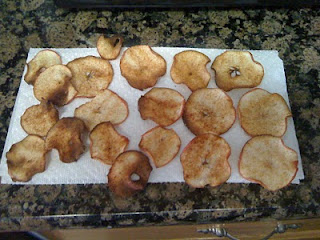 (these pics were taken with my cell phone so sorry for some sideways pics that didn't auto correct. I'm still having issues loading "real" pics onto the computer!)