Hi 2014 runners! I've updated the format on this post...wow I had no idea it was so wonky! sorry! 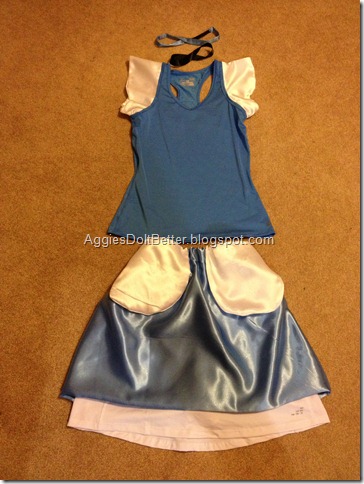 ﻿﻿ This is what I started with: I purchased at Academy a blue tech tank top and inexpensive white tennis skirt. If you already have these things, then you are ahead of the game! This tennis skirt was $14 (running skirts are upwards of $60!) and the Under Armor tank was $30 I think. A splurge, but something I will get tons of use out of in the future. Then I went to the fabric store and got some costume satin. This kind had a little bit of glitter in it. And it was super cheap. I picked the closest blue I could find to my tank top. I just kind of wrapped the bolt around me to see how much I would need for a skirt. I think I got about a yard, because I wanted some extra. Then I got some white to make the pockety-puff thingies for the skirt. I only got about 24 inches. And then some soft black satin ribbon for the choker. All in all, I spent about $50. Only ten of that was at the fabric store. So, definitely ideal if you use your own clothes!
﻿﻿

To make the skirt, I folded the material over longways and sewed it together. I wanted double layering on the skirt. (In hindsight, this made the waistband too thick so I probably would go with single layer next time.)

Then I folded the top over to measure for length with my white skirt underneath.


Then I added elastic to the top.

for the pockets, cut 4 half circle shapes out of the white.

sew them together and sew the raw edges under.

I decided to pin them to my skirt rather than sew them. I safety pinned 3 at the top, the side ones through both layers and the middle one through the inside layer. Instead of having these be decorative, I wanted to get some practical use out of them.


I added another pin inside at the bottom to keep it from flopping around.

For the sleeve puffs I cut 4 of this shape out of the white. sew them together along the curved side and then fold under the raw edges of the straight side and sew that together too.


Then I safety pinned them to my tank top sleeves on the under side. Pin the straight side to the tank top. My tank top cut way in on the back so I just kind of attached them at the bottom under my arms. I wasn't that worried about how the back looked.

You can see it kind of looks weird in the back but that didn't bother me! I made a simple headband with the blue material and attached a little velcro to the black ribbon for the choker. They aren't in this picture but I also found some $2 fake pearl earrings at Walmart to complete my costume!

I found this! Perfect! BUT it wound up just being too light of a color for my nails so I wound up putting it on my toes :)