[Race Recap: I'm writing these posts because reading other's blogs about this race really helped me prepare. When you're doing a huge event like this as a rookie it is really good to have a little bit of knowledge on what to expect. So I took lots of pictures and hopefully my recaps will help others. Pay it forward!]

To see Part 1 of this series about my costume CLICK HERE!!

I have a You Tube channel now! Click here to watch the short video clips I took during the race!! I will be uploading more videos in the future so I'd love it if you subscribed!


Here I am race morning. This is around....oh....3:45 in the morning. So that's 2:45 central (my) time. Can we all agree that this should still be called "nighttime" and not "morning"? YIKES. But I went to bed suuuuuuuuuuuuper early (about 8:30-9) FL time and slept allright, so I wasn't in too bad of shape. I kind of felt like I had never really gone to sleep. And yes, I AM wearing makeup. I read a tip about doing your makeup, even though you'll be running and its so early, so you'll look halfway decent in pictures. And I'm glad I did. Like I said before, the bibs are huge, and I couldn't figure a way to get it pinned on the right way, so I left the bottom unpinned and hoped it wouldn't flap around too much. It didn't. In my white pockets I have stashed: my sunglasses (which I never needed), a tube of lipstick, chapstick, and a few bandaids. I was planning on putting gu's in there, but wound up taking my own and using my SpiBelt under my skirt for that. I stashed the gu's I got during the race in my pockets :) 3 cheers for a practical costume!

I left my hotel around 4am, right as I had planned. The traffic.....was....EPIC.  I still made it there around 5 I think? I really don't remember. You are supposed to be in your corrals at 5. The timeline is honestly a little fuzzy, so I don't remember what time I actually got there. If I ever do it again, I would leave 30 min earlier, just for a little more padding. That's right. LEAVE the hotel (POP Century, on property) at 3:30am. 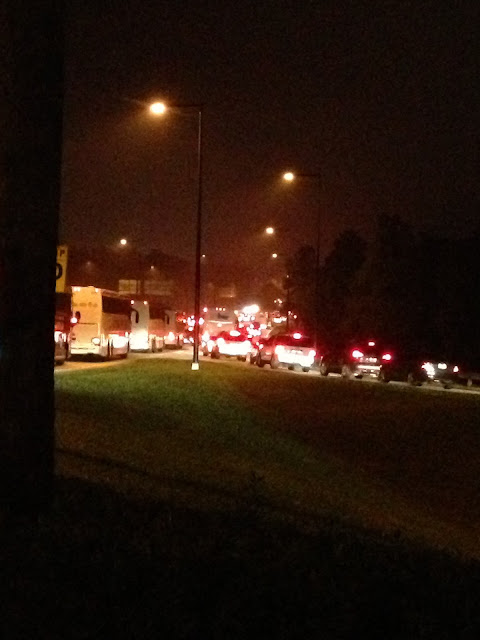 This is the walk to the corrals. There is a gathering area with a guy on a stage trying to get people pumped, and bag check.And porta potties.  I didn't get a pic of this area. Not that exciting. Then you pass though the bag check, "runner only" area to begin the 20 min walk to the corrals (out and on an access road) It was dark but there was plenty of lights. And porta potties. This access road was only about as wide as a golf cart trail, so lots of people walking on the grass/dirt (FORESHADOWING!)
Luckily, it wasn't COLD! I have read people take old sweatshirts to wear and toss to the side and Disney will pick them up and donate them . There was boxes along the way here and there for them, but it was unseasonably warm so no one was wearing jackets! (thank goodness.) 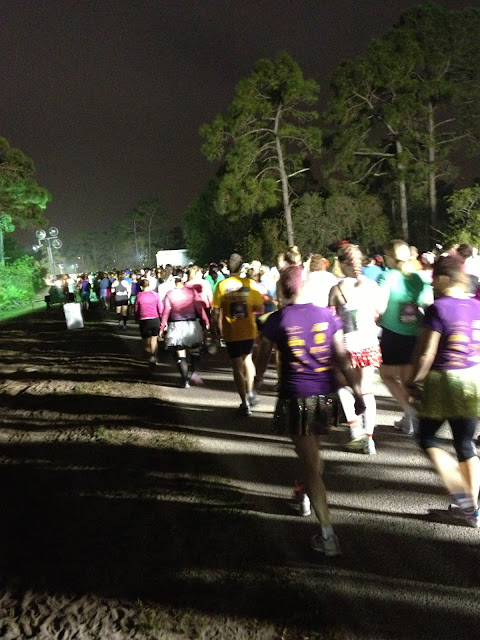 People. Just. People. At the end of the walk, this sign was directing you left for A,B and right for the rest. It flashed this inbetween, so of course people were stopping to take pics. Funny! But I did it too, of course. I will have a magical race, thankyouverymuch! 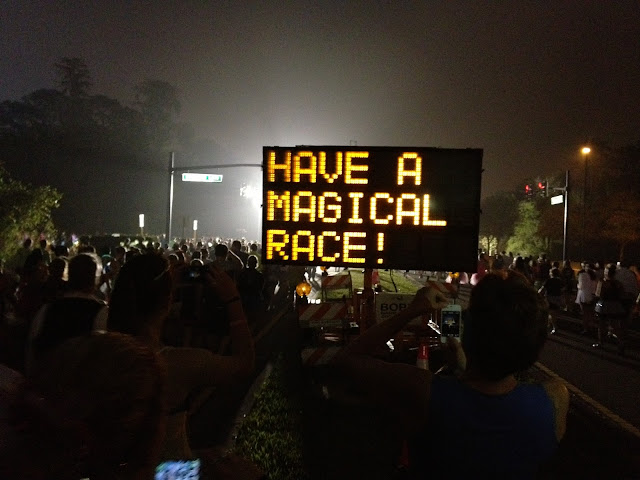 This is after the split, heading to my corral. Pitch-black dark, but plenty of light. And? PEOPLE. And? more  porta potties. 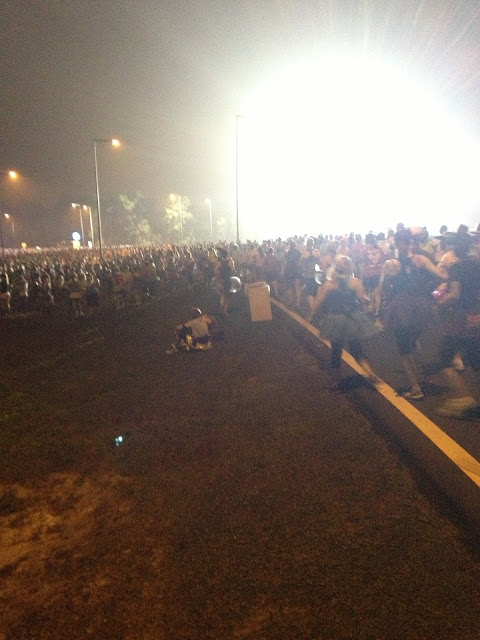 Here's the entrance to my corral. They fill you in from the back, and you can see the front of the following corral behind you with a rope. There was like 10 people checking your bib to make sure you were in the right corral. All those people in the red windbreakers? Number-checkers. 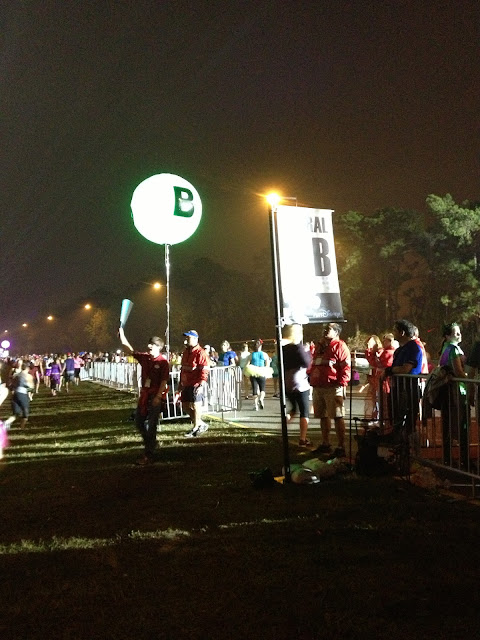 My view of the start line. Not too far back! Check out my video of the countdown and fireworks! They did that for EVERY corral. 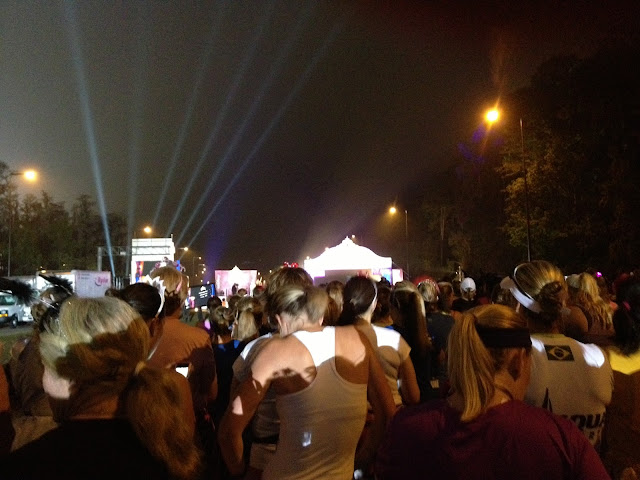 Waiting. Time for another selfie! (I took more pictures of myself this day than ever before in my life....combined. I'm not even kidding. Everyone was doing this! Funny stuff.) I noticed some girls had a towel they brought so they could sit down. Good idea! 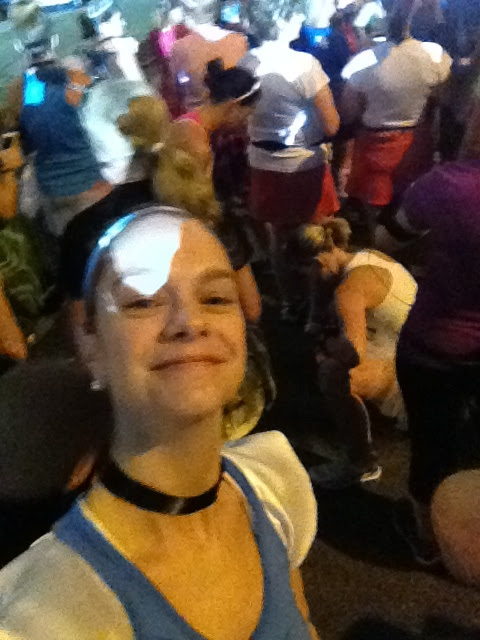 My first camera stop....The Princes! Hello! I skipped the pirates, but them and these guys were the only ones we passed twice so I got them on the way back. My strategy was to stop for as many as I wanted to, but I did skip some. This was the 2nd longest line, about 10 minutes. Not too bad. I was grateful to be in a front corral, so I had plenty of time to stop for pics. Lots of times, the line was long and you couldn't quite see who it was for. So I ran up to the front, made my decision, then ran back to the line. ( I may have said oh! it's the princes! out loud.) 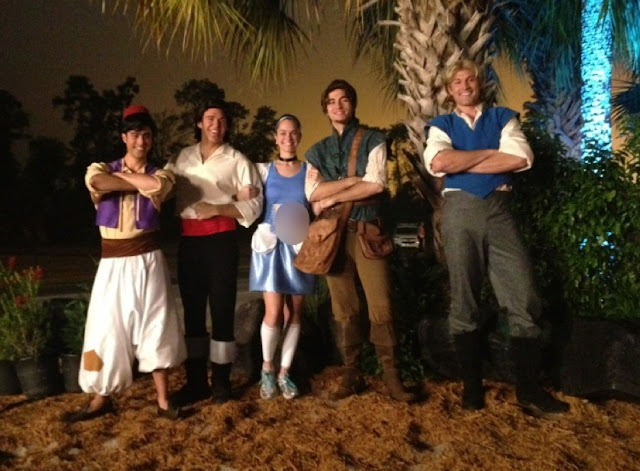 Right after the princes, we crossed into Magic Kingdom. We ran through the turnstiles. 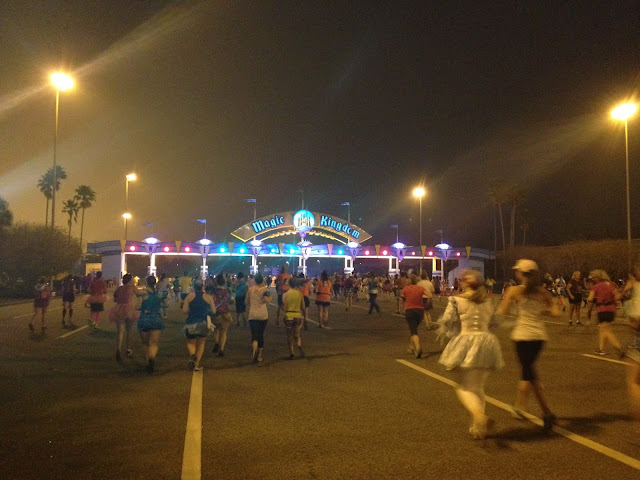 This is the only one I knew who it was coming up. Can't miss it! There's a video of this too. I took this one for my boys....although they wondered where Mater was :) 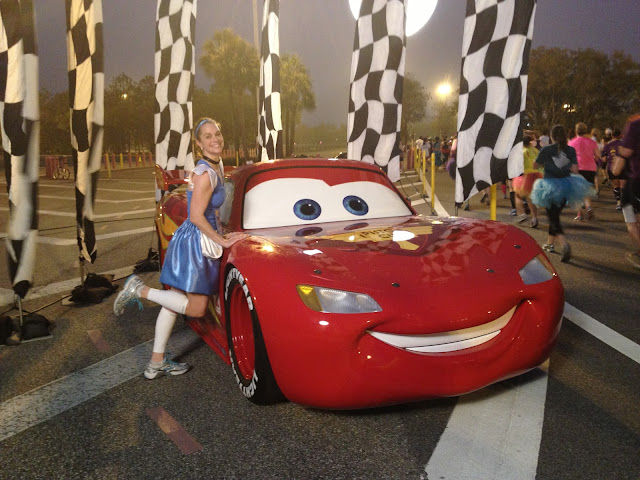 This is one I almost didn't do. I saw the Evil Queen and Cruella, and just took a pic of them at the front. Then I saw the Evil Stepmother and Stepsisters, and ran back in line. Obviously! This is actually a screen cap of a video....I forgot to take my phone off video and the girl taking the pic didn't catch it. So not a great pic! The girl in the yellow and green was OWNING that character and cracking me up the whole time I was in line. There's a video of this too. 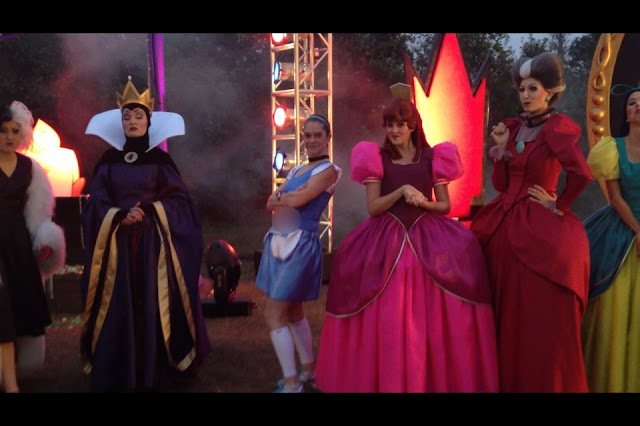 I skipped these  guys but got a drive-by pic. I didn't realize there were guys in there puppeteering them until I got right up on them! 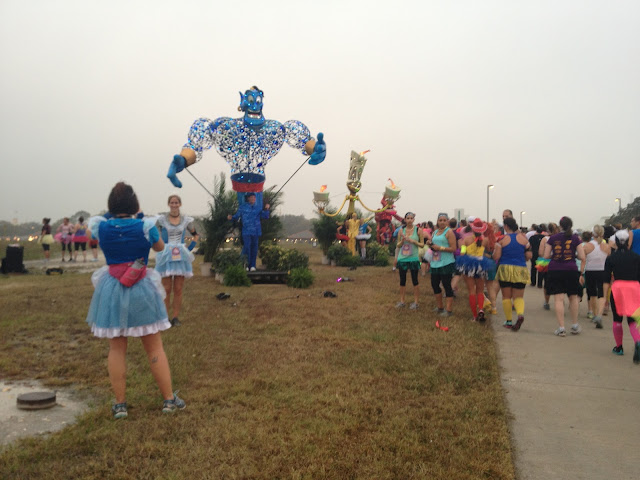 We ran behind some stuff in a service area, came out a gate, and BAM! Disney! Refreshing after 5 miles of access roads. See all the spectators? I was shocked! 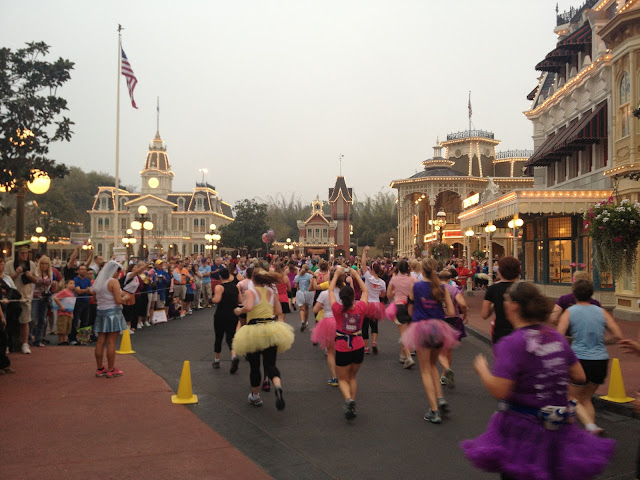 Then you turn a corner....and everyone is freaking out!!! The castle! Yep, time for another selfie. 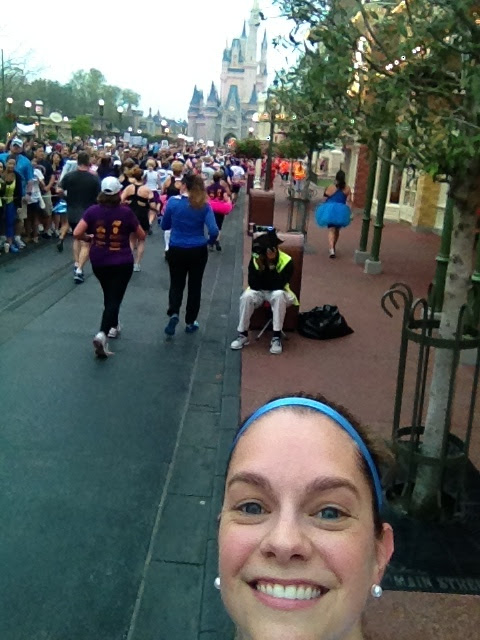 Buuuuut, you take a turn first and run through Tomorrowland. This is probably as spread out as we ever got. 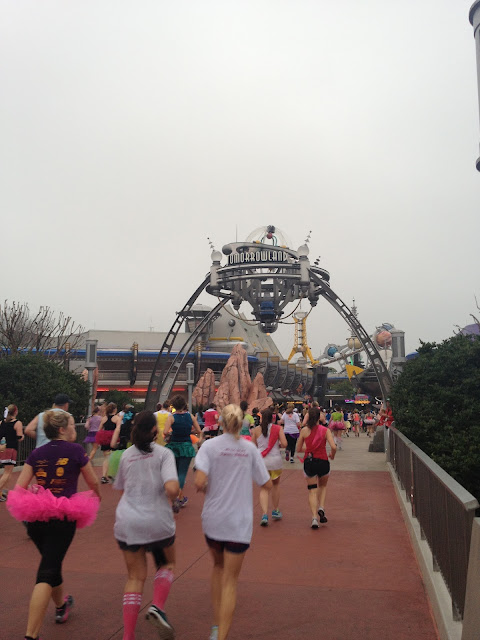 The ONE time I don't specify Please touch to focus then take it I got a blurry pic. Lesson learned! 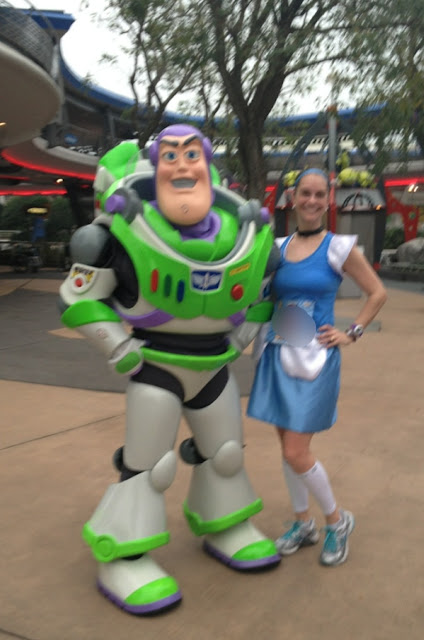 Then on toward the castle. There were "royal" trumpeters up there playing....the "Rocky" theme. And the "charge" thing they play at baseball games. Funny! The I see Mickey and Minnie and jumped in line right away. This was definitely the longest line, at least 10 minutes. Most of the other ones were less than 5. 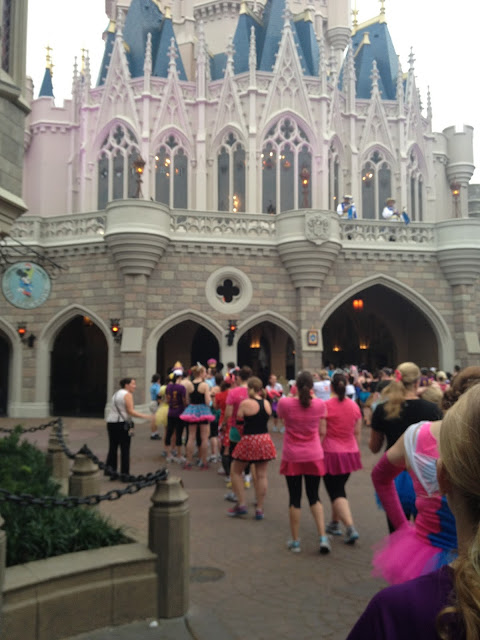 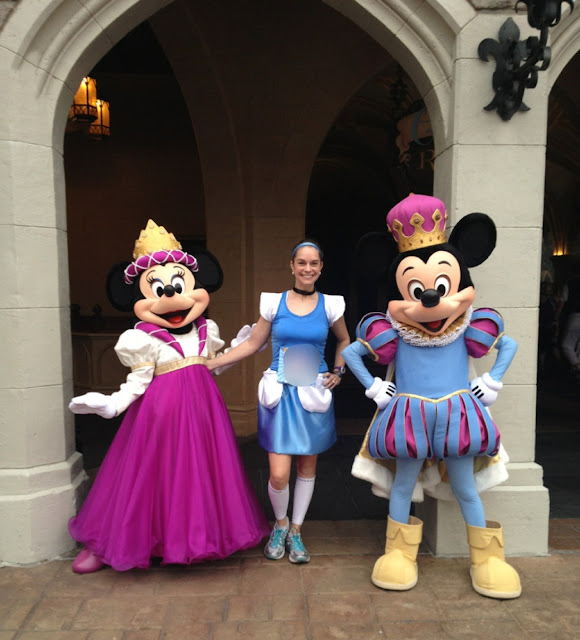 This was the only stop where they didn't have extra photographers taking pics. So we all helped eachother out. 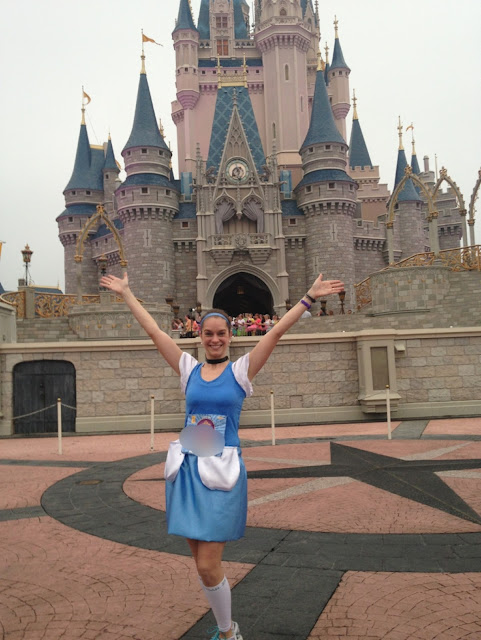 Then we ran through another part, I forgot what it was called (Frontierland?) and look who I saw! She was off to the side and I almost missed her! No Woody though :( 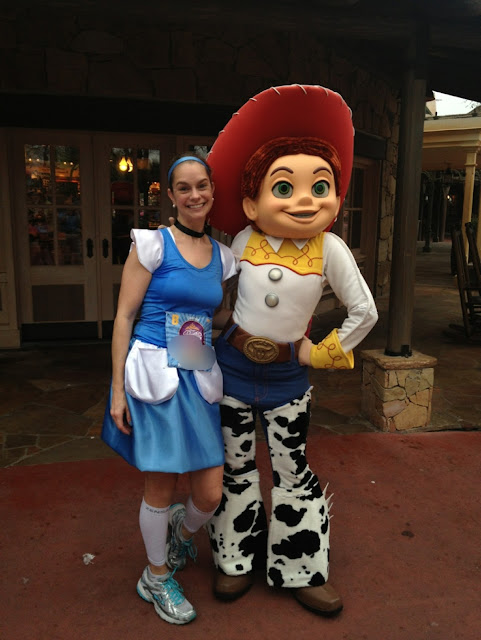 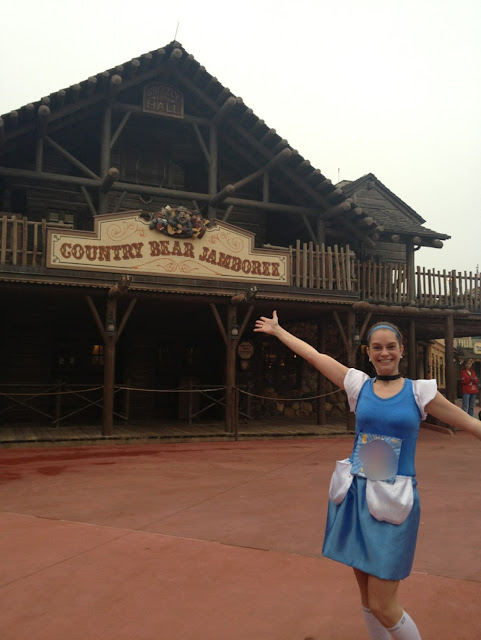 We ran by the Disney Weddings Pavillion, and these guys were out front with a glass slipper on a pillow. A little confusing, but Cinderella-themed, so a must stop for me. 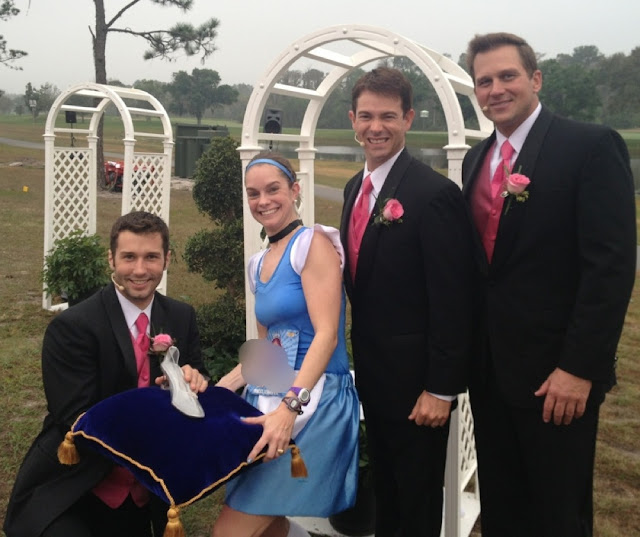 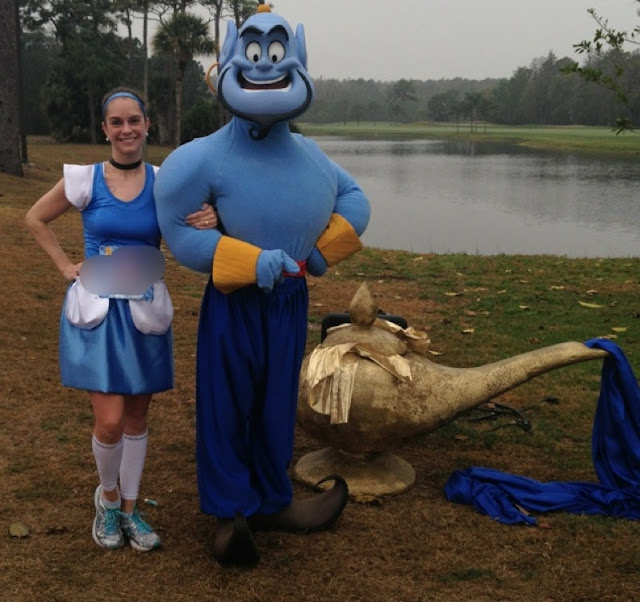 Here I am with the pirates on the way back. I only took this pic because I needed a quick break! (don't shoot me!) 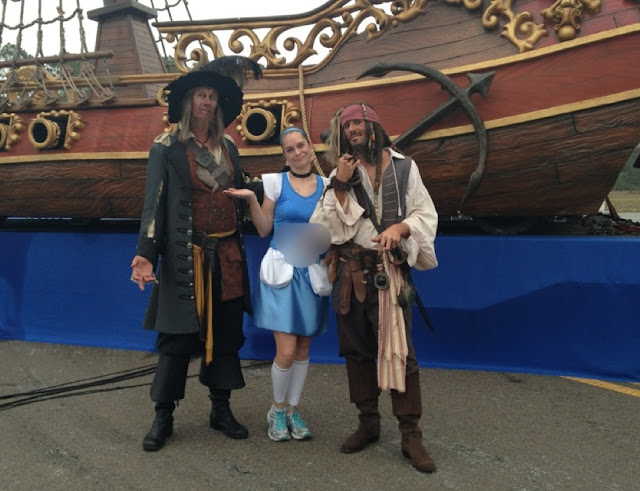 Working our way back to Epcot. We did this twice, ran around the curve of an exit-ramp type thing and over an overpass. I took this pic just to show the epic amounts of......people. 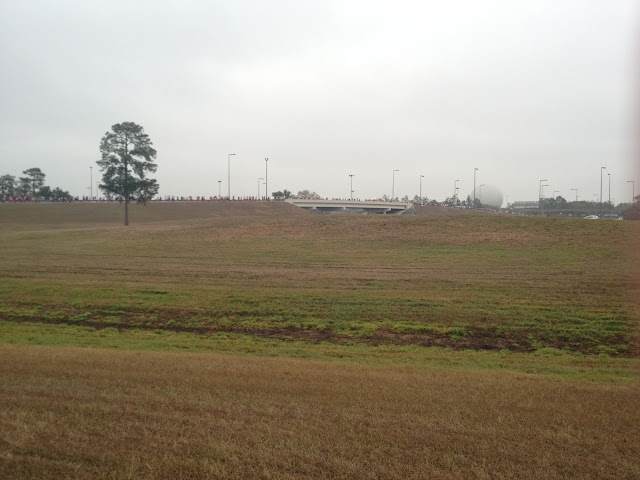 Back in Epcot and saw Fairy Godmother! Yay. 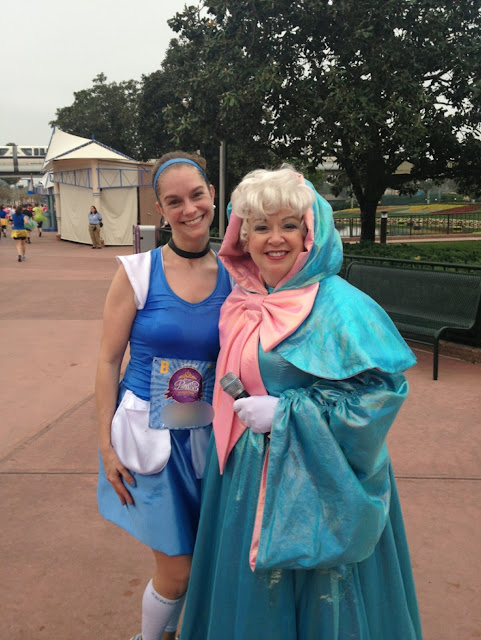 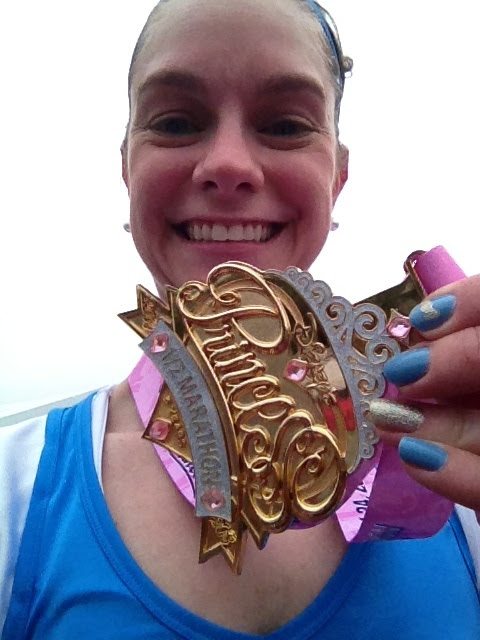 This is what you get when you get done. I was expecting this, it was the same as what I read about. And a banana. And ONE bottle of water. And ONE bottle of powerade. LOL-Disney and their rules. The contents of the box were.....meh. I meant to take a plastic bag and stash it in the pockets I worked into my costume but forgot. At 3am some things just slip through the cracks. 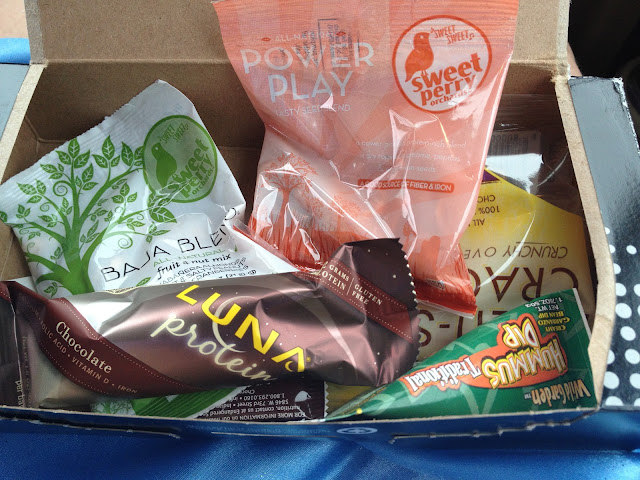 I hurried back to the hotel, showered, packed, and had some time to kill so I headed over to Downtown Disney for lunch and dessert. I went to the Haagen Daas place and got a LARGE cone with coffee ice cream and sprinkles. Because, I'm at Disneyworld. And? another selfie. 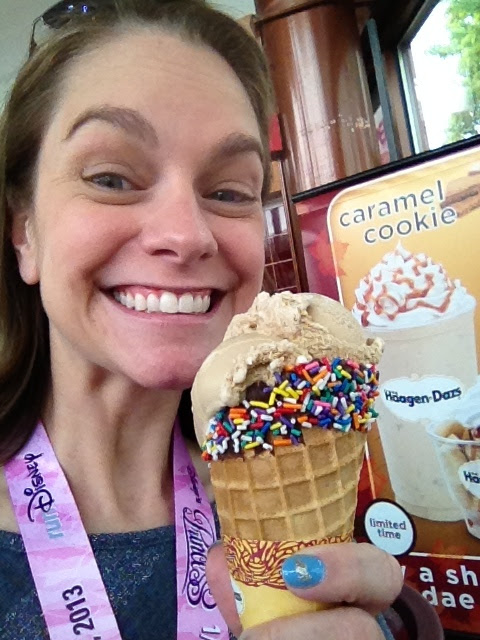 This was at the airport. I meant to get a picture with this giant Cinderella sign outside the Disney store....but didn't notice until WAY after the fact that, apparently, It's a digital sign and it changed to Ariel as the picture was being taken! Much love to Ariel, but I don't appresh the photo bomb! You can kind of still see Cindy's face fading out. This made me crack up enough I decided not to go back and re do the pic. 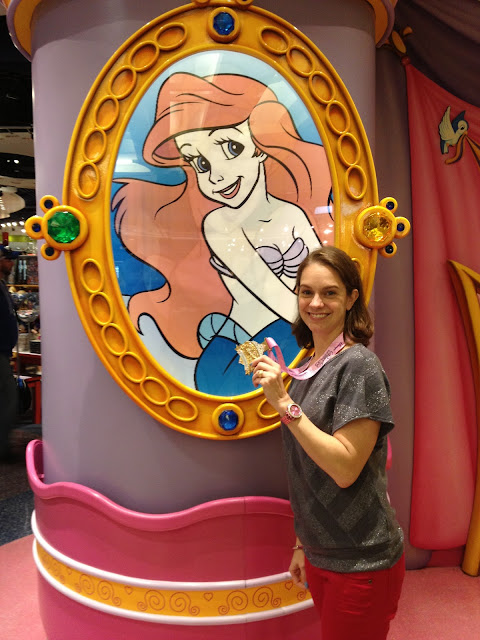 A few recap thoughts (instead of a whole 'nother post!)

* This race is CROWDED. There's no two ways about it. There's a TON TON TON of walkers, even starting as much up front as I did. I think I got caught up in them stopping so much. Most of the time I was running on the grass/dirt next to the paveway. There are times you are on a road, but also lots of times you are on a path not much wider than a golf cart trail. I am super paranoid about twisting my ankle in situations like this, and I did a little hopping on/off the path around mile 6. So that was fun. I'm not trying to complain too much about it, I think that with this many people its unavoidable. But there's not a lot of "running ettiquite" with walkers moving to the side. There were SOME, but mostly not. So just be aware of that. This is not a race to run for a time, unless you are at the front.

*Leave EARLY. Whenever you are planning on leaving, leave 30 minutes earlier than that. BY FAR the most stressful part of the day was worrying I was going to make it with all the traffic. LEAVE EARLY!

*TAKE A CAMERA or cell phone camera. There are 2 Disney photographers at every stop, and usually  1 or 2 more to take pictures with your own camera. This is awesome! BUT it is very QUICK and take the time to explain to them how to use your camera/cell phone so you will get a good pic. Even if they say "I know".   (side note: I've seen some of my running pics from MarathonPhoto but none of the character pics....not exactly sure where to see those!)

* For those curious what other character stops there was, I skipped: Belle and The beast prince guy, Tatiana, the raccoon guy from Pocahontus (random, right?), sleeping beauty and her prince, Mary Poppins , Mrs. Incredible, Madd Hatter and Alice, Mulan (I think?)
(I'll add more if/as I think of any)

*DISCLAIMER: I was in corral B. So my wait times for the characters were MY times. I'm sure if you are in a further back corral your time may be longer. Be prepared for that!

I hope this helps all you future princesses prepare for next  and future years races!!!!
Posted by Jen at 12:53 PM