Finally. Enough putting it off. I've been pretty intimidated to make these, for many reasons, among them being the MASS quantity they make. I almost halved the recipe, but I figured, we had company coming anyway, and, well, go big or go home, right? Let's get to it.
First up....melt ONE POUND of butter. I've gotten on quite the good terms with real, actual butter over the past couple years, but mainly just for making frosting. This is, without a doubt, the largest amount of butter I've ever used at one time for something non-frosting related.
I just put this bad boy in the microwave. 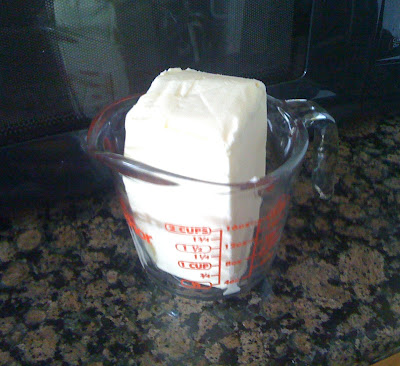 Down he melts into 2 cups of melted butter. WOW. 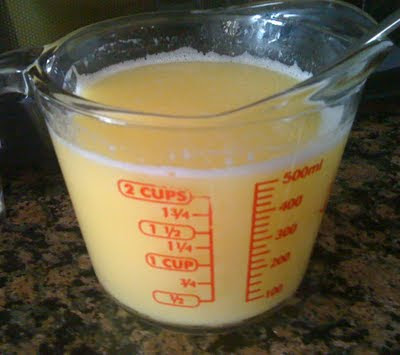 On we go with the dough (which was made earlier in the day). I did feel that it was pretty sticky...that proved to be quite the problem. It's entirely possible I miscounted the cups of flour...but I don't think I did. I took out half the amt of dough and attempted to roll it into a 30inch by 10inch rectangle. I don't actually have that much counterspace to work with, so I just did the best I could (about 20inches). Also, despite my floured countertop, it was sticking so bad it wasn't rolling out very well. 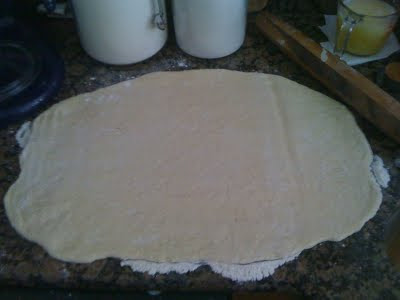 On I dump and spread out almost 1/2 the butter (about 1 cup) and the cinnamon and sugar. It was QUITE the mess. 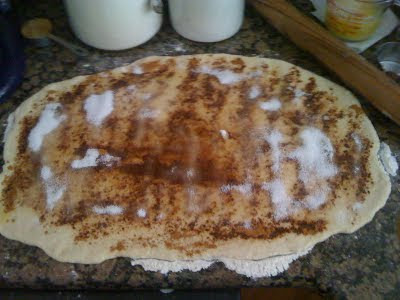 So I start rolling. UGH! I had the hardest time with this because 1) the dough was too thick because I didn't roll it out enough and 2) it hella stuck to the countertop and kept trying to rip open as I was rolling it toward me. AND, when I got to the end, it was coming out all over the place. It's mentioned it might do that, but I'm already limited on counter space. You can see how close we're getting to the edge....yeah. Messy. 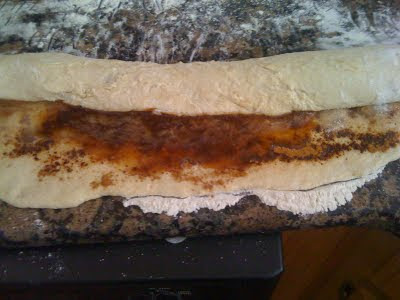 Someone remind me not to wear a black tank top next time, ok?
Having to be 7 feet from the counter is also providing some cooking challenges :) 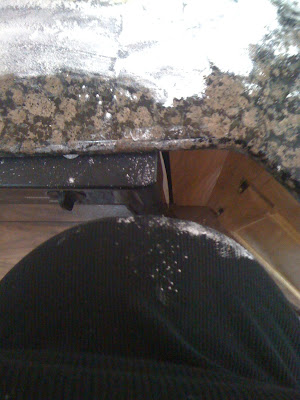 Anyhoo, I managed to get it sliced and into the dishes. The ones in the bottom dish are really, um , special looking. It was really hard to roll it up tight enough. 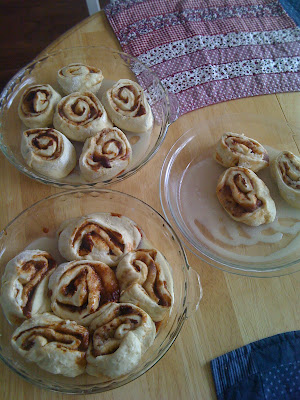 Ok. Round two. Instead of taking the whole 2nd half of the dough out, I took half that. But not before kneading a decent amount of flour in it. Trying to cut down on the sticky-ness and hoping it doesn't become too dry. The smaller amount of dough also allowed me to roll it out thinner. I was also much more sparing with the melted butter. 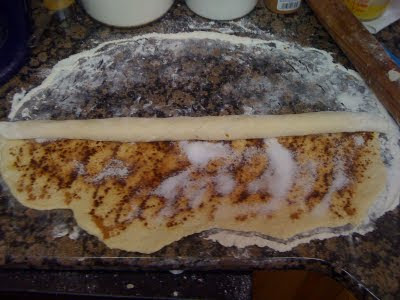 I also put a CRAP TON of flour down on the counter. This time was waaaaay better. See the pretty rolls? The are sitting in-yep, you guessed it-more melted butter. 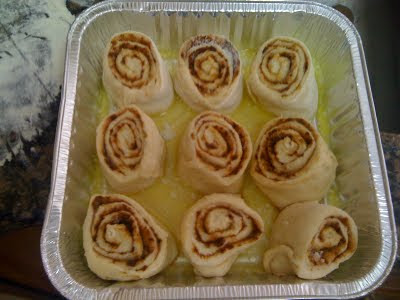 Here's the finished amount. The recipe says you can either freeze them already baked and iced, or freeze them unbaked, and then let them unthaw and rise and bake then ice. I planned on splitting the batch and doing both, to see which was better. I put the square pans into the freezer.
(I did try one of them over the weekend, it took about 2 hours to unthaw and rise. So, not that convenient. I suppose I could have put them in the fridge the night before? Still have a batch so will have to try that also). 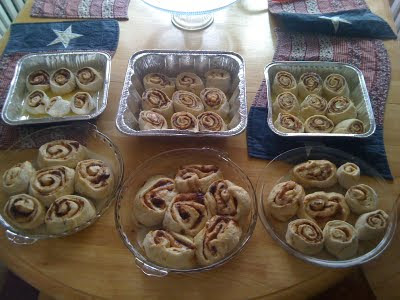 The round dishes were left out to rise. 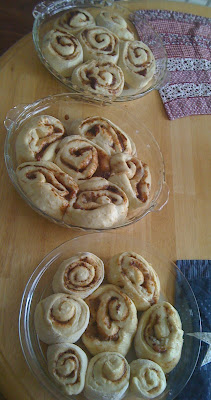 And bake. Too bad we don't have smell-o-blog. 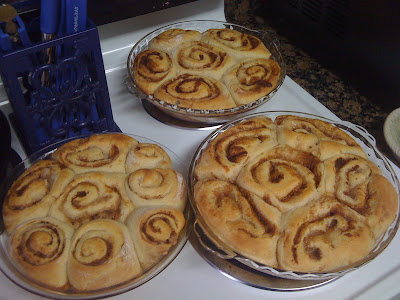 And then iced. The icing is pretty much your standard powdered sugar and milk icing, but with butter and maple flavoring. Outstanding. I halved the icing recipe to ice these as they came out of the oven. I let the icing set on them and cool, and it kind of absorbs into them. I wasn't sure about how "icing-y" they would be after being frozen, would I have to ice them again? 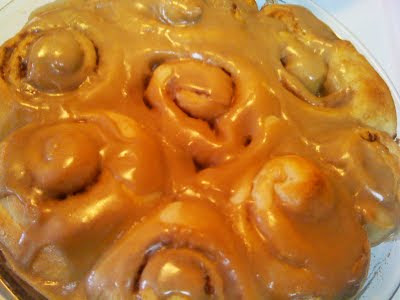 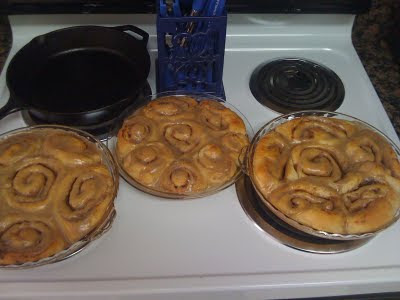 Turns out, not. They were still pretty good. One morning we had a batch of each, and I think they came out pretty much the same. Obviously it's way more convenient to just pop them in the oven already done and just warm them up, although it took about 30 min, not the 15 stated in the book. I'm also wondering if I could bake them, then freeze them uniced. That way, they're already done, and could have fresh icing on them. Will try that next time I make them. This was definitely an all-day project, but with things like that I'm glad for the mass quantities so you only have to do it once. These are definitely not something that you could just whip up in the morning. I think I will be working on an easier version of these....They are WAY better than the canned kind, obviously!
Posted by Jen at 7:00 AM