I've been looking forward to this one for all 4 weeks since I was asked to do it! This was for one of our neighbor's daughters who was having a sleepover party. Remember those days?? Sigh.
She wanted alot of things on it and was worried it would be too much. That's one of the things that I love about doing this. It's my job to find a way to incorporate all the things someone wants in a way that looks beautiful and makes them feel special! 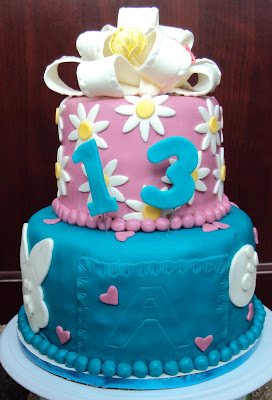 The bottom tier has 4 animals on it; 2 bunnies, 1 piggy, and 1 doggie. These she wanted to represent past cakes her daughter has had. Teal blue is her favorite color. 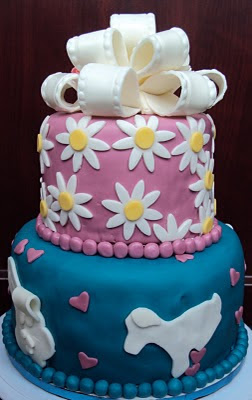 She also loves flowers and they wanted daises on there. I decided to play with one of my new fondant tools I got from my Wilton class for the bow.

It is super cool. It has all these interchangeable parts that let you cut out ribbons of fondant with crinkly or wavy edges. There's also "embosser" parts that imprint a pattern on the edges. I LOVES IT!! 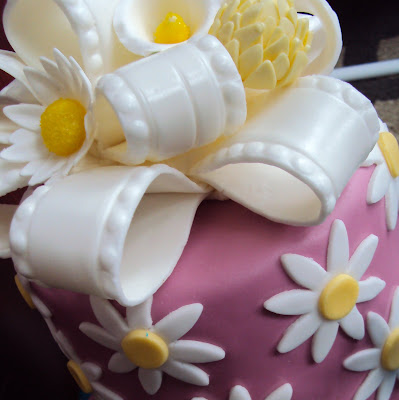 I used my marshmallow fondant for the bow. I have been testing the limits of it lately to see exactly what I can and can't use it for in addition to just covering cakes. Turns out, it doesn't dry quite hard enough to use for bows like this. I broke like 4 loops putting it together. ugh. At least I had enough to make the bow she wanted to be the topper. I threw in a few extra gumpaste flowers I had to give it a little extra oomph. 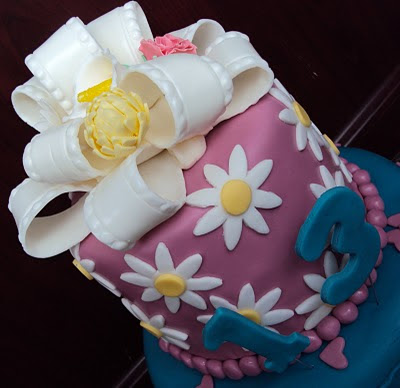 I feel like I'm saying this alot lately but this is one of my favorite cakes I've made!