This week the Aggies take on Arkansas State in the new Cowboys stadium, so I'm taking the chance to do another team in the Big XII that we aren't playing this year: Iowa State. Again, with the hard logos!! On this one I had to use the "Rule of Oklahoma State", where I have to eliminate some of the microscopic lettering. Under "State", it says "cyclones". The scale of these logos is about 5 inches, so it's hard enough to cut out even normal sized letters! 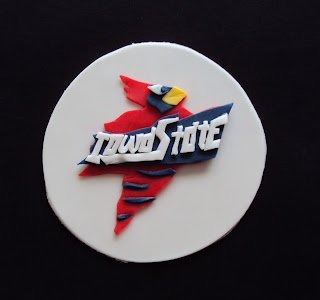 This guy also had tons of blue swirly things all around him, I'm guessing to indicate movement?, that I just couldn't do with fondant. Maybe sometime I could try those food-marker things again, I never had any luck with them before. 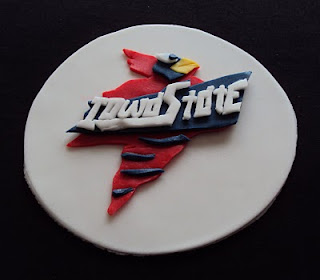 post note: I've been lovingly reminded by my husband that we are playing ARKANSAS, not Arkansas State. Bah. Same thing.

Email ThisBlogThis!Share to TwitterShare to FacebookShare to Pinterest
Labels: food, tour of the Big XII