October's Cupcake of the Month

Hello, My name is Jennifer. And I'm a project-starter. 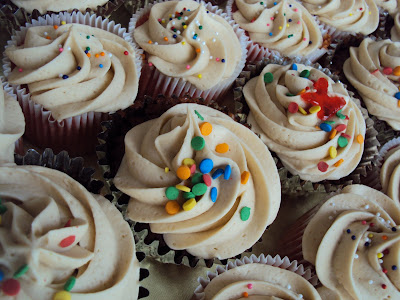 So, if that's not enough, I decided I needed to do a "Cupcake of the Month". This will allow me to branch out with my cupcake flavors and try out how some of my favorite holiday flavors do in a cupcake. It doesn't help that we are officially in the "baking season", my bread and butter!
(mmmmm.....bread.....)

I decided October needed to be something fall-ish, but not to Thanksgiving-y, we have November for that. I guess I kind of already did this with the Candy Corn cupcake, but since I did that before now I can't really count it! So I decided on Carmel Apple. The idea was red, apple-flavored cake with Carmel Buttercream frosting. The trick is findng a recipe for apple cake that's JUST apple, not apple-cinnamon, or spice, or something like that. Not so easy!

I decided on trying out 2 recipes.
The first one was just adding a bunch of chopped apples into my regular vanilla cake. It turned out pretty good, it held the red color very well and was very moist from the apples, but it caused it to sink a little and be pretty dense. And not very apple-y, turns out. 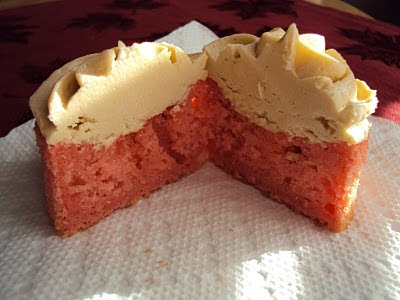 The second was a recipe from Martha Stewart. It had cinnamon and nutmeg in it, which I added all of in against my better judgement. The result was more like muffin, an apple-cinnamon muffin, which was very good, but not really what I was going for. It didn't hold the coloring I put in it at all...it kind of went to the center. Wierd. 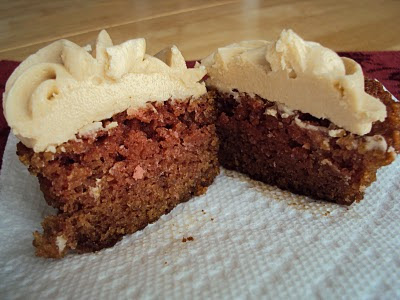 For the frosting, I experimented with adding different amounts of caramel to my vanilla buttercream recipe. Now that was awesome. If there's one thing I can do well, it's frosting! YUM!

All in all, neither one turned out indivdually to be exactly what I wanted. I'm not sure if I'll try another recipe or wait until November to try....
Posted by Jen at 8:00 AM

Email ThisBlogThis!Share to TwitterShare to FacebookShare to Pinterest
Labels: cupcake of the month, cupcakes, food